THE CONTEXT: The Indian Rupee has depreciated nearly 10% since the beginning of the year and is making headlines, especially after falling below the psychological mark of 78 against the dollar. In this article, we will analyse the causes and impacts of rupee depreciation. 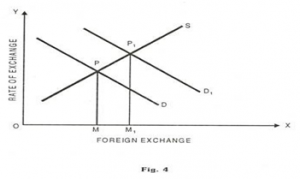 foreign money and not exclusively the function of prices obtained between two countries.

According to this theory, when the supply of the dollar is reduced, then the more Rupee present in the market chase this less dollar, then Rupee weakens and depreciates. The reasons for the present reduced supply of dollars are given below.

FIVE TIMES RUPEE DEPRECIATION SINCE 2010: INDICATES THE VULNERABILITY OF THE RUPEE

REASONS ASSOCIATED WITH THE DEPRECIATION

Impact on other sectors 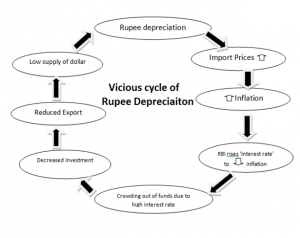 STEPS TAKEN BY RBI IN SUCH A SITUATION

THE CONCLUSION: Financial market volatility is here to stay as advanced economies are unwinding years of monetary policies. The growing trade tensions between US and China could severely undermine the multilateral trading system. These global developments will continue to exert downward pressure on the Rupee in the coming months. It is therefore imperative for Indian policymakers to prepare for all eventualities.