THE CONTEXT: In June 2022, NITI Aayog released a report on the Gig economy in India. The report “India’s Booming Gig and Platform Economy: Perspectives and Recommendations on the Future of Work”, underlines the opportunities and challenges of this sector. Among other things, the report estimates the gig workforce to be 68 lakhs by 2019-20 and 77 lakhs by 2020-21. As per the estimates in the report, close to 60% of such Workforce are in Retail & the Transportation sector. The article identifies the opportunities and challenges of this sector.

IMPORTANCE OF THE REPORT

WHAT IS THE GIG ECONOMY?

WHAT IS PLATFORM WORK?

WHAT IS MEANT BY INFORMALISATION OF LABOUR?

WHAT IS THE MEANING OF FORMAL AND INFORMAL SECTORS?

JOB & INCOME SECURITY, OCCUPATIONS SAFETY ARE AMONG THE MAJOR CHALLENGES WITH GIG-BASED WORK 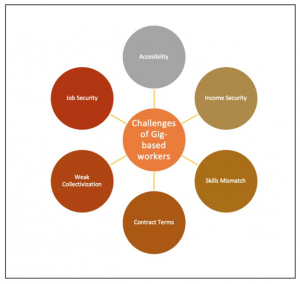 HOW DOES THE GIG ECONOMY LEAD TO INFORMALISATION?AN ANALYSIS

OUTSIDE THE PURVIEW OF THE REGULATORY FRAMEWORK

NO SCOPE FOR COLLECTIVE BARGAINING

POSITIVE SIDE OF GIG ECONOMY

HOW TO BRING ELEMENTS OF FORMALIZATION IN GIG ECONOMY?

DATA ON THE SIZE OF THE GIG WORKFORCE

CLARIFYING THE RELATIONSHIP BETWEEN THE COMPANY AND THE WORKERS

UNIONIZATION OF THE WORKERS

BEST PRACTICES OF THE STATE GOVERNMENTS.

HOW CAN THE ABOVE ISSUES BE ADDRESSED?

NITI Aayog’s study report takes cognizance of the different challenges faced by gig workers in the country. The report has also identified the need to upskill the gig workers to take advantage of the existing and future opportunities. A few of the recommendations of the study report are the following.

THE CONCLUSION:The Economic Survey 2021 has appreciated the role of the gig economy in service delivery and employment provision to the labour force during the pandemic period. This sector holds out huge promise, especially in the context of governments’ push toward a digital economy through Digital India. It is true that the freelance nature of the work and other attributes may not strictly fit into the traditional employer-employee matrix. But that does not mean the labour should be left for exploitation and suffer from poor working conditions. It is in the interest of all stakeholders, the promoters, management, workers, the shareholders, the consumers and others that adequate concrete measures be adopted for a win situation for all.