TOPIC : THE PARADOX BETWEEN GROWTH AND POVERTY ERADICATION

THE CONTEXT: The discontentment with growth not being beneficial to all became a highly debated topic in the past few years and the arena of policy making also focused on reforms in a situation where India achieved higher economic growth but sluggish poverty reduction. Realising the importance of this debate, the government of India also envisioned “inclusive growth” as a strategy to ensure that economic progress is pro-poor and inclusive. This article explains various reasons for poverty in India and how can economic growth be of help in reducing the poverty.

WHAT IS ECONOMIC GROWTH?

Economic growth is an increase in the production of economic goods and services, compared from one period of time to another. It can be measured in nominal or real (adjusted for inflation) terms. Traditionally, aggregate economic growth is measured in terms of gross national product (GNP) or gross domestic product (GDP), although alternative metrics are sometimes used.

Economic growth refers to an increase in aggregate production in an economy. Often, but not necessarily, aggregate gains in production correlate with increased average marginal productivity. That leads to an increase in incomes, inspiring consumers to open up their wallets and buy more, which means a higher material quality of life or standard of living.

India’s economic journey since 1947 has seen its share of ups and downs. Once branded a “third world country”, a term for poor developing nation-states which has now fallen into disuse, India is now among the biggest economies of the world. In 1991, India was a leader of the G-77 (a group of poor countries constantly demanding more concessions to develop). Today India is in the T-20, the top 20 economies that lead the world.

CAUSES OF POVERTY IN INDIA

Ø  Inequalities Arising Out of Concentrated Land Ownership and Concentration of Tangible Wealth in the Rural Sector.

Ø  Inequalities in Professional Knowledge and Training

PREVALENCE OF THE LAW OF INHERITANCE

Ø  SOCIAL FACTORS: Apart from economic factors, there are also social factors hindering the eradication of poverty in India. Some of the hindrances in this regard are the laws of inheritance, caste system, certain traditions, etc.

Ø  CLIMATIC FACTORS: Most of India’s poor belong to the states of Bihar, UP, MP, Chhattisgarh, Odisha, Jharkhand, etc. Natural calamities such as frequent floods, disasters, earthquakes and cyclones cause heavy damage to agriculture in these states. 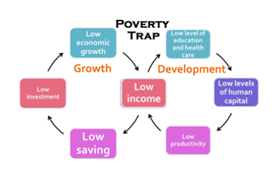 INEQUALITY MAKES THE FIGHT TO END POVERTY MUCH HARDER

THE ANALYSIS: THE GROWTH – POVERTY PARADOX

ü  India has the third-highest number of billionaires in the world, just behind China and the United States.

ü  Also, in the same year, the share of the bottom 50% of the population in national wealth was a mere 6%.

MGNREGA may have a role in mitigating immediate rural distress on account of drought and other unforeseen calamities. But programmes like PMGSY provide more effective long-term poverty alleviation solutions, through raising overall productivity and expansion of non-farm employment opportunities.

Bhagwati Model:The idea in the book ” Why Growth Matters: How Economic growth in India reduced Poverty and lessons for other developing countries” is in consonance with Adam Smith’s theory of the invisible hand of the market. It believes that increasing the pie of growth can ultimately lead to an increase in income and consequent development. In other words, it believes in the trickle-down effect.

Amartya’s Sen Model:The idea is propounded in his book ” An uncertain glory: India and its contradiction”. It proposes an increase in the capacity and capability of people as the prime mover of development. Thus Government needs to invest in public health, infrastructure, education and democratic participation. It fosters the idea of a bottom-up approach. The ability of each individual as a change agent. It is about empowerment.

EQUAL OPPORTUNITY FOR ALL

LEARN FROM OTHER COUNTRIES

India’s dominant economic growth over the last 30 years continued to pull millions of people out of poverty. Due to the unexpected impact of COVID-19, India experienced a spike in its poverty rate. Moving forward, the elimination of poverty in India over the next decade is within reach in spite of the challenges ahead.Rapid economic growth and the use of technology for social sector programs can help make a significant dent in extreme poverty in the country.