THE CONTEXT: According to the latest report released by the global media watchdog, Reporters Without Borders (RSF), India’s ranking in the 2022 World Press Freedom Index has fallen to 150 out of 180 countries. In last year’s report, India was ranked 142. The government has disagreed with the findings of the RSF that ranked India poorly. The government claimed that the report was based on small sample size and gave little or no importance to the “fundamentals of democracy”. This article explains in detail about the World Press Freedom Index and the reasons for the decline in India’s ranking in it.

WHAT IS THE WORLD PRESS FREEDOM INDEX?

Methodology: The score is calculated on the basis of two components:

Each country or territory’s score is evaluated using five contextual indicators that reflect the press freedom situation in all of its complexity: political context, legal framework, economic context, sociocultural context and safety.

Ability to gather news without unnecessary risk of:

PERFORMANCE OF INDIA THROUGH GRAPHICAL REPRESENTATION

The chart shows India’s rankings across various categories in 2022. India ranked best in the legal framework category and worst in the safety of journalists category. 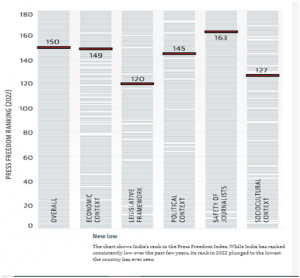 The chart shows India’s rank in the Press Freedom Index. While India has ranked consistently low over the past few years, its rank in 2022 plunged to the lowest the country has ever seen. 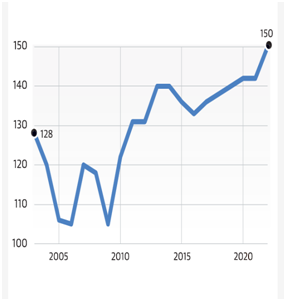 MAJOR FINDINGS OF THE REPORT

REASONS FOR THE DECLINE IN INDIA’S RANKING

CRITICISM OF THE INDEX

STATE OF PRESS FREEDOM IN INDIA

THE CONCLUSION: SDG Target 16.10 enjoins governments and all stakeholders to ensure public access to information and protect fundamental freedoms, in accordance with national legislation and international agreements. An objective measure of press freedom across countries and a well-coordinated multi-stakeholder approach towards establishing press freedoms are essential towards improving democratic outcomes like transparency, accountability, people’s participation etc. With these overarching goals in mind, Reporters Without Borders must use its unique position and expertise to evolve a globally acceptable definition of press freedom by engaging with all countries which it ranks and strive to remove inconsistencies and biases in its ranking methodology and provide clarity on its funding sources. Also with systemic censorship on the rise and journalists facing constant threats from the government as well as other political outfits, the future of independent journalism in India today is in the hands of those institutions that have been struggling to retain their independence and promote journalistic rights: most importantly the courts, but also editors and journalists’ associations and independent news media themselves.

FREEDOM OF PRESS IN INDIA

Matters related to interests of the sovereignty and integrity of India, the security of the State, friendly relations with foreign States, public order, decency or morality or in relation to contempt of court, defamation or incitement to an offence.