THE CONTEXT: The 3rd meeting of the India-Central Asia Dialogue was held under the chairmanship of the External Affairs Minister of India. Ministers of Foreign Affairs of the Republic of Kazakhstan, Kyrgyz Republic, Republic of Tajikistan, Turkmenistan, and the Republic of Uzbekistan took part in the meeting.

IMPORTANT OUTCOMES OF THE MEETING 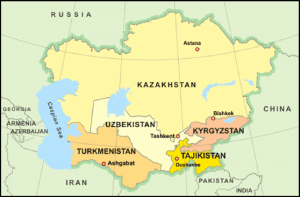 THE CONTEXT: According to researchers, with its size, population and aggravating air pollution, India needs 1,600 to 4,000 air quality monitors but has only 804 as of September 2021, most of which are concentrated in urban areas.

There are 261 real-time monitors whose data are updated on the central database. This network is technically part of the National Air Quality Monitoring Programme but its data are stored and treated separately because Central Pollution Control Board has not established a method of equivalence between the two monitoring techniques, the 2020 Centre for Science and Environment report pointed out.

THE CONTEXT: After successfully reintroducing the critically endangered Gharial (Gavialis Gangeticus) in the rivers of Punjab where it had become extinct half a century ago, the State’s wildlife preservation wing is now keeping its fingers crossed, expecting the breeding of the crocodilians to start in the new few years as the released gharials are healthy and have adapted to the Beas Conservation Reserve as their home.
THE EXPLANATION: 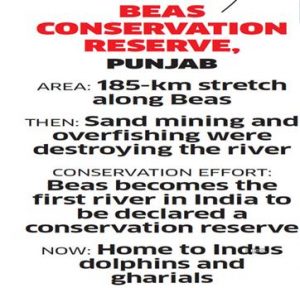 Significance of Agni V
Agni V is used to enhance India’s nuclear deterrence against China. Earlier, the longest-range missile in India was Agni-III, which had the range of 3000–3500 km. This range was not sufficient to reach targets eastern and north-eastern region of China. Thus, DRDO was working on the upgraded version of this missile called Agni-V.

What is Ballistic Missile?

Types of ballistic missiles based on the range

What is the difference between ballistic and cruise missiles

Q1. ‘Nord Stream’ sometimes seen in the news is a natural gas pipeline between which of the following countries?

A) Russia and Germany

Statement 2 is correct: It consists of a chairperson and 6 Members.