THE MENACE OF DRUGS AND NARCOTICS

THE CONTEXT: There has been an unprecedented upsurge in drug abuse in Indian society. The recent cases of drug abuse in Bollywood showcase the level of penetration of this menace. Also, north Indian states like Punjab have been grappling with the issue for quite some years.

FACT-CHECK ON DRUG ABUSE IN INDIA 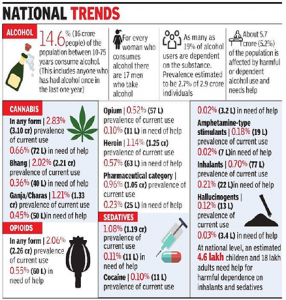 ABOUT DRUGS AND THEIR ABUSE

The term ‘narcotic’ in the legal sense is quite different from that used in the medical context which denotes a sleep-inducing agent. Legally, a narcotic drug could be an opiate (a true narcotic), cannabis (a non-narcotic) or cocaine (the very antithesis of a narcotic, since it is a stimulant). The term ‘psychotropic substance’ denotes mind-altering drugs such as Lysergic Acid Diethylamide (LSD), Phencyclidine, Amphetamines, Barbiturates, Methaqualone, and designer drugs (MDMA, DMT, etc.).

WHAT IS DRUG ABUSE? 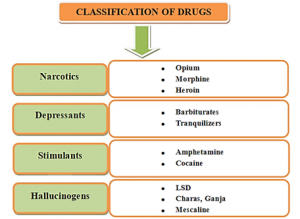 STIMULANTS: These drugs speed up the body’s nervous system and create a feeling of energy. They are also called “uppers” because of their ability to make you feel very awake. Stimulants have the opposite effect of depressants. When the effects of a stimulant wear off, the user is typically left with feelings of sickness and a loss of energy.

DEPRESSANTS slow down activity in the central nervous system of your body. These drugs are also called “downers” because they slow the body down and seem to give feelings of relaxation.

HALLUCINOGENS: When taking hallucinogens, switching emotions is frequent. These drugs change the mind and cause the appearance of things that are not really there. Hallucinogens affect the body’s self-control, such as speech and movement, and often bring about hostility.

Types of drugs include:

PRESCRIPTION DRUGS can be very helpful drugs when used properly and when under the guidance of a qualified physician. These drugs can be used as aids in surgery, to treat medical conditions and while controlling various symptoms. Misuse and abuse of prescription drugs however can be very dangerous.

Types of drugs include: 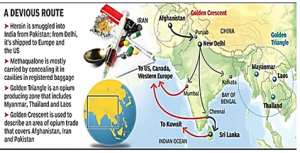 THE WAY FORWARD: EFFORTS TO ERADICATE MENACE OF DRUG ABUSE

ROLE OF MINISTRY OF SOCIAL JUSTICE AND EMPOWERMENT

THE CONCLUSION: The Karnataka High court opined that the NCB should act like ‘Chanakya’ in addressing the menace of drug abuse. The issue needs an iron hand especially towards the sources of drug proliferation. To secure both presents as well as the future of our so-called demographic strength, the youth, the authorities must act like Chanakya, who completely removed the stump of grass from the root as it obstructed his movement. While the borders need more robustness for isolating India from the opium hot lands, the authorities within the territory must be more vigilant to curb the proliferation of substance.