THE CONTEXT: In May 2021 India’s as a member of the UNSC made a carefully crafted statement at the UN Security Council “open debate” on the escalated Israel-Palestine violence, striving to maintain a balance between India’s historic ties with Palestine and its blossoming relations with Israel. India’s statement at UNSC seeks a balance between its old ties with Palestine and growing relations with Israel. This article traces India’s journey through the world’s oldest conflict, from Nehru years to the Modi regime.

SECURITY COUNCIL MEETING ON THE CONFLICT

AN ANALYSIS OF THE INDIA’S STATEMENT

However, the balancing did not appear to have gone down well with the Israeli side. When Prime Minister Benjamin Netanyahu, who has a good rapport with Narendra Modi, thanked 25 countries that he said stood with Israel, there was no reference to India.

WHY DOES INDIA TRIED TO CREATE A BALANCING ACT?

The creation of Israel and the ‘Catastrophe’ 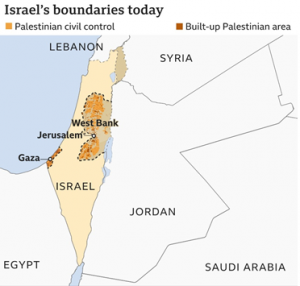 CONCLUSION: India, which historically has been an ally to the Palestine cause, has resorted to a balancing act on issues concerning Israel and Palestine. But this act is a repudiation of India’s historical worldview and it disregards the harsh realities which are skewed against Palestine. By compromising on India’s longstanding policy by not acknowledging Eastern Jerusalem as the capital of Palestine, which is the crux of the ‘two-state solution, India blemishes the geographical validity of the solution itself. India, with its history pulling through the partition, which essentially was a political issue with a religious dimension, to build an inclusive, secular democracy, can act as the viable model for the peaceful coexistence of formerly antagonistic groups. For this to materialize, India must relinquish its balancing act and call a spade a spade.