1. COVAXIN GETS WHO’S EMERGENCY USE NOD 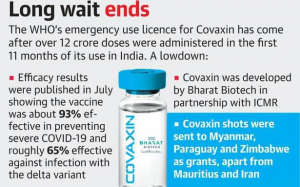 THE MAIN FEATURES OF THE BILL

THE CONTEXT: As per Central Pollution Control Board’s (CPCB), the air quality of the city deteriorated to the “severe” category on November 5, a day after Deepavali.

THE CONTEXT: According to the United Nations’ food agency, world food prices are the highest since July 2011, reflecting in part reduced wheat harvests by major exporters and higher palm oil prices.

THE CONTEXT:  The recent report produced by the Global Carbon Project (GCP) suggests that the decreased levels of emissions during the pandemic would be soon reversed.

THE CONTEXT: Edible Oil prices show a declining trend across the country.

THE CONTEXT: Researchers have engineered enzymes to enable faster manufacture of molnupiravir, an investigational oral antiviral being developed for the treatment of Covid-19. The study appears in ACS Central Science.

THE CONTEXT: India and Senegal signed a memorandum of understanding (MoU) on Health and Medicine in Dakar and both sides celebrated the 60th anniversary of their diplomatic ties.

THE CONTEXT: China and Russia are urging the U.N. Security Council to end a host of sanctions against North Korea including a ban on exports of seafood and textiles, a cap on imports of refined petroleum products, and a prohibition on its citizens working overseas and sending home their earning.

Q.1  “Zero click”, the term sometimes seen in the news, is related to