THE CONTEXT: ‘The Adaptation Gap Report 2021: The Gathering Storm’ released by the United Nations Environment Programme (UNEP) during the ongoing COP26 at Glasgow.

2. COMPARISON OF INDIA’S NET-ZERO GOAL TO OTHER COUNTRIES

THE CONTEXT: India was the only one among the major greenhouse gas emitters that hadn’t specified a so-called net-zero year.

THE CONTEXT:  India, Indonesia and the Philippines will join South Africa as the first recipients of a multibillion-dollar pilot programme aimed at accelerating their transition from coal power to clean energy, the Climate Investment Funds (CIF).

THE CONTEXT: The proposal of DPIIT for the PLI Scheme for White Goods for the manufacture of components and sub-assemblies of ACs and LED Lights was approved by the Union Cabinet.

THE CONTEXT: The Government slashed excise duties on petrol and diesel by Rs. 5 and Rs. 10 per litre respectively, citing the need to help farmers with the rabi crop, ease inflation and give the economy a consumption boost. 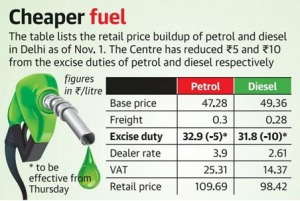 THE CONTEXT: India is adding more gold to its rising foreign exchange kitty of $640 billion. The Reserve Bank of India (RBI) has acquired 75.59 tonnes of gold in the last 12 months.

THE CONTEXT: Israeli spyware company NSO Group, the maker of phone-hacking tool Pegasus, has been added to a federal blacklist by the US Department of Commerce, thereby restricting it from accessing America-made technologies.

Q1 The Adaptation Gap Report is released by?

Sources of methane include: