THE CONTEXT: The latest Accidental Deaths and Suicides in India report, published by the NCRB, notes that 11,716 businesspersons died of suicide in 2020, a 29 per cent jump from 2019 when 9,052 businesspersons had died of the same cause.

THE CONTEXT: PM speaks to Tamil Nadu CM about heavy rainfall in parts of the state

THE GLASGOW DECLARATION ON FOREST AND LAND USE

THE CONTEXT: A paper published in the journal, Nature Geoscience, has come up with a new reason behind the first mass extinction, also known as the Late Ordovician mass extinction.

THE CONTEXT:  The Indian SARS-CoV-2 Genomics Consortium (INSACOG) said, the frequency of the new AY.4.2 variant of COVID-19 is less than 0.1 % of all VOI/VOC and is too low to be of concern at this time.

THE CONTEXT:  A solar flare that occurred on the Sun triggered a magnetic storm that scientists from the Center of Excellence in Space Sciences India (CESSI) had predicted. 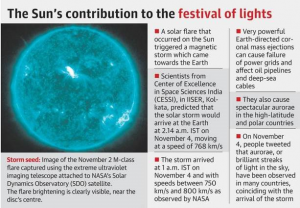 ABOUT SUNSPOTS AND SOLAR STORMS

THE CONTEXT: A fisherman from Maharashtra was killed in firing by the Pakistan Maritime Security Agency (PMSA) on an Indian fishing boat off the Gujarat coast on 6th November 2021. 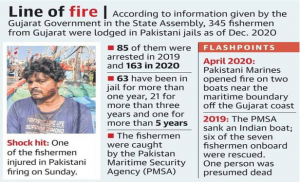 Which of the statements given above are correct?