Should contempt powers be reviewed ?

THE CONTEXT: The Supreme Court had initiated suo moto criminal contempt proceedings against advocate and activist Prashant Bhushan for his tweets regarding the functioning of Judiciary. The long drawn battle between the two has raised the issue over the need for review of contempt powers of court

1. In the first tweet, He commented on the role of Judiciary especially the last four CJIs in the destruction of Indian Democracy.
2. In the second tweet, He commented on the CJIs act of driving a 50 lakh bike at a time when the SC was in lockdown.
3. Supreme Court initiated contempt proceedings on the basis of a complaint filed by a lawyer. Subsequently, Supreme Court held Mr. Bhushan guilty on both twits “against the judiciary”.
4. Advocate Bhushan refuses to apologise. This started a battle between the two due to which experts called the Supreme Court’s action as causing a chilling effect on fundamental right to freedom of expression.
5. Supreme Court finally took a liberal approach and gave a punishment for Rs. 1 only.

Sources of contempt in constitution

3. ‘Scandalising the Court ’broadly refers to statements or publications which have the effect of undermining public confidence in the judiciary. 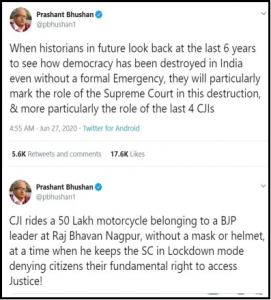 1. Fairness of criticism vs. Contempt : There is a think line between the two which needs to be checked by the judiciary as fair criticism of Judiciary is not contempt as per Section 5 of The Contempt of Court Act, 1971.
2. Interference : Section 13 of Contempt of Court Act states that even if some comment is assumed to be contempt, unless it substantially interferes or tends to substantially interfere, sentence cannot be imposed.
3. Truth of Statement : As per the amendment of 2006 in Contempt of Court Act which introduced section 13(b), truth is considered as a valid defence against contempt proceedings.

1. Fundamental Duty to develop spirit of inquiry and reform : Article 51A(h) mandates that every person needs to develop the scientific temper, humanism and spirits of inquiry and inform. If critical analysis of Judiciary is threatened with persecution, it stops citizens from performing their duty.
2. Freedom of Expression: Fair criticism of Judicial action is not contempt of court and thus citizen’s fundamental right to freedom of speech and expression under Article 19(1)(a) should be encouraged and not denied.
3. Right against Self-incrimination: Article 20(3) embodies the principle of privilege against self incrimination and declares that a person cannot be compelled to be a witness against himself. In Contempt of court cases, judges directly question the accused.
4. Vindication of Judges: Contempt power is necessary for the proper administration of justice. It is not to be used for the vindication of a judge as a person. However, in the present case it was used for the vindication of sitting CJI.
5. Vagueness: Section 2(c) of the Contempt of Court Act, 1971 uses phrases like scandalises or tends to scandalise or Lower the authority of court which are vague in characteristic.

Law commission of India report of 2018

1. High no. of Contempt cases: The Commission observed that there were a high number of civil (96,993) and criminal (583) contempt cases pending in various High Courts and the Supreme Court. The high no. of cases justify the continuing relevance of the Act.
2. International Comparisons: UK has abolished contempt laws. However, there are two differences with UK which warrant its continuity in India.

3. Source of Contempt laws : Superior courts in India derive authority from the Constitution. Thus, deletion of the offence from the Act will not impact the inherent constitutional powers of the courts.
4. Impact on Subordinate courts : If the definition of contempt is narrowed, subordinate courts will suffer as there will be no remedy to address cases of their contempt.
5. Ambiguity : Amending the definition will cause ambiguity. If there is no definition for criminal contempt in the Act, superior courts may give multiple definitions and interpretations to what constitutes contempt.
6. Adequate Safeguards : The Commission noted that there are several safeguards built into the Act to protect against its misuse. The Commission further noted that the Act had withstood judicial scrutiny, and therefore, there was no reason to amend it.

1. Independent Tribunal : The bench that faced contempt should not be the same that decides the contempt. A separate independent tribunal should be established to look after all the contempt cases.
2. Separation of criticism of judge and Judiciary : Courts should write down reason for initiating contempt proceeding and explicitly explain how it impacts the imparting of justice and is not due to the criticism of some libel judge or some verdict.
3. Liberal Approach towards Contempt : The courts should not be sensitive towards criticism and only take up contempt in various serious cases of Contempt.
4. Regulation of Social Media : Twitter which was used by Prashant Bhushan gives absolute freedom of speech and expression can be misutilised for spreading contempt. Thus, there is a need to ensure that technology is not utilised for undermining the institutions.

1. Regina versus Commissioner of Police, 1968 case : The judgment remarked, ““Let me say at once that we will never use this jurisdiction as a means to uphold our own dignity. That must rest on surer foundations. Nor will we use it to suppress those who speak against us. We do not fear criticism, nor do we resent it. For there is something far more important at stake. It is no less than freedom of speech itself.”
2. Chief Justice Gajendra Gadkar : He cautioned against frequent or indiscriminate use of the power of contempt and observed, “Wise Judges never forget that that the best way to sustain the dignity and status of their office is to deserve respect from the public at large by the quality
of their judgments, the fearlessness, fairness and objectivity of their approach and by the restraint, dignity and decorum which they observe in their judicial conduct.
3. D.Feldman in his book – Civil Liberties and Human Rights in England and Wales, argues that the nature of the proceedings of contempt are in breach of Article 6 of the European Convention of Human rights which guarantee that an accused be informed of the nature and
cause of the allegation against him .
4. Justice Krishna Iyer :“The principle is to avoid confusion between personal protection of a libeled Judge and prevention of obstruction of public justice and the community’s confidence in the great process. The former is not contempt, the latter is, although overlapping spaces
abound.”
5. Phillmore Committee of UK : The crime of scandalising the court should be replaced by a new and strictly defined criminal offence.