1. CJI SENDS 2ND NOTE OVER NAMING NEW JUDGES: WHAT IS THE SC COLLEGIUM, HOW IT WORKS

THE CONTEXT: With two of the five-member Supreme Court Collegium against a proposal to recommend four new judges to the top court through a written note instead of a formal meeting, Chief Justice of India U U Lalit is learnt to have written to them again, seeking reconsideration of their stand.

2. THE SUPREME COURT SAYS ABORTION RIGHTS NOT LIMITED TO ‘CIS-GENDER WOMEN’: WHAT THIS TERM MEANS

THE CONTEXT: In a significant judgment, the Supreme Court said it was unconstitutional to distinguish between married and unmarried women while allowing abortion when the foetus is between 20-24 weeks. Going a step further, the court said the term ‘woman’ in the judgment included persons other than cisgender women. 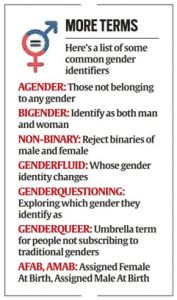 Cisgender: Origins of the term

Why the word cisgender is important?

Use of gender-inclusive vocabularies in official documents

Those who advocate the use of ‘birthing people’ say it is not just women who give birth. Transmen — a person assigned the female gender at birth but who identifies as a man – and genderqueer people – who identify as neither man nor woman – also give birth.

3. THE INCREASE IN CHOLERA CASES

THE CONTEXT: The World Health Organization (WHO) has warned of a “worrying surge” in cholera cases across the globe.

Cholera is an acute, diarrheal illness caused by infection of the intestine with the bacterium Vibrio cholerae. The infection is often mild or without symptoms, but sometimes can be severe.

How does a person get cholera?

Can cholera be treated?

GOVERNMENT SCHEMES AND INITIATIVES IN NEWS

THE CONTEXT: NIMHANS and HelpAge India are jointly implementing Sarthak to ensure mental well-being of elderly.

According to the NGO HelpAge, over 20 per cent of adults aging 60 and above suffer from a mental or neurological disorders like dementia and depression. During the pandemic, it found that in a sample size of 5,000 people, 60 per cent reported that they felt lonely and isolated. 40 per cent of them have felt depressed. This issue is expected to worsen in the coming years. The Longitudinal Ageing Study of India (LASI) report forecasted 14 million senior citizens in India will face mental health issues by 2050. This is a significant increase from the current figure of 5 million. Currently, in India, 2 in 10 people facing mental health issues are not receiving any kind of assistance to address mental health problems. There is only 1 psychiatrist for over 2 lakh people.

THE CONTEXT: The Nobel Committee announced the names of three physicists as Nobel Laureates for this year. They are Alain Aspect from the University of Paris-Saclay, France; John F. Clauser of John F Clauser and Associates, California, USA; and Anton Zeilinger, University of Vienna, Austria.

They have been awarded for “experiments with entangled photons, establishing the violation of Bell inequalities and pioneering quantum information science,” according to a press release by the Royal Swedish Academy of Sciences, which awards the Nobel Prizes every year.

Breakdown of the classical

Trajectory and its absence

The UNHCR is a UN agency involved in the protection of refugees and displaced and stateless communities. It is involved in their voluntary repatriation, local integration and resettlement in a foreign country.

Spread the Word
Tags: THE INCREASE IN CHOLERA CASES THE NANSEN AWARD