1.KERALA ASSEMBLY HOLDS 61 SITTINGS IN 2021, THE HIGHEST IN THE COUNTRY

THE CONTEXT:Kerala, which slipped to the eighth slot in holding the sittings of the State Assembly during the first wave of the COVID-19 pandemic in 2020, got back to the first place in 2021, with its House sitting for 61 days, the highest for any State. 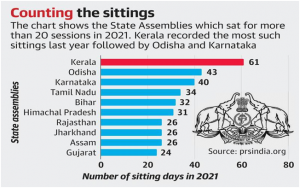 THE CONTEXT: India welcomed the expansion of the Shanghai Cooperation Organisation (SCO) to include Iran in 2023 year, as External Affairs Minister S. Jaishankar shared a table with Foreign Ministers of China Wang Yi, Pakistan Bilawal Bhutto, Russia Sergey Lavrov and central Asian countries at the ministerial meeting in Tashkent on 29 July 2022.

THE CONTEXT: The Manas Tiger Reserve in Assam has 2.4 tigresses for every tiger, the annual wildlife monitoring results of the trans-boundary wildlife preserve has revealed.

THE CONTEXT: Heatwaves and droughts can change the rules of wet regions, causing them to adopt the processes prevalent in the dry areas of the world, a new study has suggested.These findings suggest that desert-like changes could emerge in Europe and the United States, regions currently swept by heatwaves.

What is an international bullion exchange?

India, a leading importer of bullion

How will it work?

THE CONTEXT: India’s eight core sectors’ output growth moderated to 12.7% in June from 18.1% in May, with all sectors except crude oil registering an uptick in production. 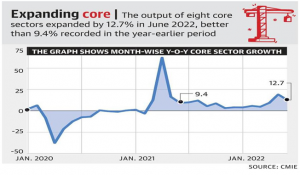 QUESTIONS OF THE DAY

Q1. Regional Anti-Terror Structure (RATS), sometimes seen in news, is relate to which of the following organization?

Q2. Which of the following is not a member of Shanghai Cooperation Organisation (SCO)?

ANSWER FOR THE PRACTICE QUESTION