TOPIC: WHY DOES THE GULF MATTER FOR INDIA?

THE CONTEXT: Recently, the ruling party suspended its national spokesperson and expelled its Delhi spokesperson, following comments they had made about Islam and the Prophet. The move came after three countries in the Gulf region had summoned the Indian ambassadors to their nations to register their protest and demanded a public apology from India.It underlines the significance of the Gulf region for India. This article explains in detail the relations between India and the Gulf countries.

WHAT IS THE PERSIAN GULF REGION? 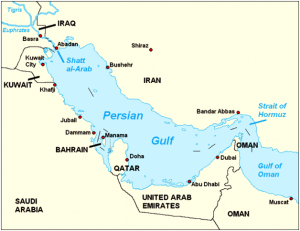 WHY IS THE GULF REGION IMPORTANT FOR INDIA?

India has enjoyed centuries of good relations with countries like Iran, while smaller gas-rich nation Qatar is one of India’s closest allies in the region. India shares good relations with most of the countries in the Gulf. The two most important reasons for the relationship are oil and gas and trade. Two additional reasons are the huge number of Indians who work in the Gulf countries and the remittance they send back home.

UAE: The UAE was India’s third-largest trading partner in 2021-2022 and second largest for both exports ($28 billion) and imports ($45 billion) when these are counted individually.

Saudi Arabia: At a total volume of $42.9 billion in 2021-22, Saudi Arabia was India’s fourth-largest trading partner.

Qatar: The total trade was $15 billion, accounting for just 1.4% of India’s total trade, but the country is India’s most important supplier of natural gas. 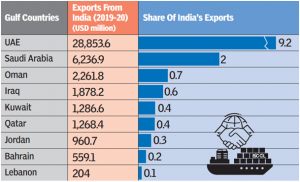 EFFORTS BY THE INDIAN GOVERNMENT

VISITS TO THE REGION

GIVING IMPORTANCE TO THEIR RELIGION

INDIA’S PRIORITIES IN THE GULF

THE CONCLUSION: The Government and the diplomatic establishment can never underestimate the power of hurt sentiment, religious sensitivities in foreign policy, or the speed of social media. Many have questioned whether the reaction would have been as tough if the Government had taken the controversy and protests more seriously domestically and engaged with the problem much earlier. It was a lesson the US learned in 2012 after protests over a movie on Prophet Muhammad turned violent and led to the terrorist attack on the US embassy in Benghazi in which the US Ambassador was killed. The attacks on Charlie Hebdo and cartoonists in Europe in 2007 were another case in point- clearly, the sensitivities over a religious matter are important- as is protecting freedom of speech and ensuring no violence or harm comes to anyone.

The Gulf Cooperation Council (GCC) is a political and economic alliance of six countries in the Arabian Peninsula: Bahrain, Kuwait, Oman, Qatar, Saudi Arabia and the United Arab Emirates.

Established in 1981, the GCC promotes economic, security, cultural and social cooperation between the six states and holds a summit every year to discuss cooperation and regional affairs.

The GCC comprises six main branches that carry out various tasks, from the preparation of meetings to the implementation of policies. They are- the Supreme Council, Ministerial Council, Secretariat-General, Consultative Commission, Commission for the Settlement of Disputes and the Secretary-General.

Whether the GCC still has a relevant function and role in the region is questionable. Though it was created for the purpose of solidifying union ranks, the blockade imposed on Qatar by its neighbours has largely annulled these principles.

The Gulf states have in the past differed in their views on several issues that have unfolded in the region over the past two decades. The role of the GCC has also been diminishing ever since the 2003 US-led invasion of Iraq, with the six states illustrating various approaches to the war and its consequences. This has been enhanced during the wave of protests that swept the Middle East in 2011, known as the Arab Spring. Saudi Arabia has gained a dominant role within the GCC today.