“The “Rule of Law” is what we fought for; the “Rule by Law” is an instrument of colonial rule. In the face of a pandemic, it’s important to reflect on how the tension between the two defines the quality of justice.”

THE CONTEXT: On June 30th, 2021, Chief Justice N.V. Ramana delivered the 17th Justice P.D. Desai Memorial Lecture on the “Rule of Law”. According to CJI, regular participation in polls was not a guarantee against the tyranny of the elected. In his speech, he underscored the pressure of social media on institutions. Identifying Covid-19 as “an unprecedented crisis”, CJI urged the governments to evaluate how they used the rule of law or failed to ensure protection to, and, the welfare of all of our people. This article provides insights into the lecture on the Rule of Law vs. the Rule by Law.

IMPORTANT EXCERPTS OF THE LECTURE

JOURNEY FROM RULE BY LAW TO RULE OF LAW:

CONSTITUTION AND RULE OF LAW:

THE ROLE OF LAWYERS:

THE ROLE OF SOCIETY:

4 CORE PRINCIPLES OF RULE OF LAW

PRINCIPLE: ‘LAWS MUST BE CLEAR AND ACCESSIBLE’

DETAILS: When laws are expected to be obeyed, the people at least ought to know what the laws are. Law should be worded in simple, unambiguous language.

ANALYSIS/PRESENT STATUS: In India, we are constantly striving to make legislations and judgments accessible to the general public by translating them into various Indian languages.

PRINCIPLE: “EQUALITY BEFORE THE LAW”

DETAILS: An important aspect of “equality before the law” is having equal “access to justice”. Access to justice forms the bedrock of the “Rule of Law”.

ANALYSIS/PRESENT STATUS: This guarantee of equal justice will be rendered meaningless if the vulnerable sections are unable to enjoy their rights because of their poverty illiteracy or any other kind of weakness. There is a need for legal empowerment of women. It not only enables them to advocate for their rights and needs in society but also increases their visibility in the legal reform process.

PRINCIPLE: “RIGHT TO PARTICIPATE IN THE CREATION AND REFINEMENT OF LAWS”

DETAILS: The very essence of a democracy is that its citizenry has a role to play, whether directly or indirectly, in the laws that govern them.

ANALYSIS/PRESENT STATUS: In the seventeen national general elections held so far, the people have changed the ruling party or combination of parties eight times, which accounts for nearly 50 percent of the number of general elections. Despite large-scale inequalities, illiteracy, backwardness, poverty, and alleged ignorance, the people of independent India have proved themselves to be intelligent and up to the task. The masses have performed their duties reasonably well.

DETAILS: The judiciary is the primary organ that is tasked with ensuring that the laws which are enacted are in line with the Constitution. Judicial review is one of the main functions of the judiciary.

ANALYSIS/PRESENT STATUS: The Supreme Court has held this function to be a part of the basic structure of the Constitution, which means that the Parliament cannot curtail the same. But the responsibility of safeguarding constitutionalism lies not just on the Courts. All the three organs of the State, i.e., the executive, legislature, and the judiciary, are equal repositories of Constitutional trust. The role of the judiciary and scope of judicial action is limited, as it only pertains to facts placed before it. This limitation calls for other organs to assume responsibilities of upholding Constitutional values and ensuring justice in the first place, with the judiciary acting as an important check.

THE RULE OF LAW BY DICEY

THE EVOLUTION OF THE RULE OF LAW

DIFFERENCE BETWEEN RULE OF LAW AND RULE BY LAW

ORIGIN: The Rule of Law was first originated by Sir Edward Coke, the Chief Justice in England at the time of King James I. Coke was the first person to criticize the maxims of Divine Concept. He strongly believed that the King should also be under the Rule of Law. According to him, “Rule of Law” means the absence of arbitrary power on the part of the Government.

THE CONCEPT: The state should act as per the “Rule of Law” which is the foundation of any constitution.

DEFINITION: It is based on the Latin term ‘Rex is Lex’ which means ‘King is Law’.

ORIGIN: In his battle against the Church and common law judges, King James I of England triumphed, twisting the phrase ‘Lex is Rex’ to ‘Rex is Lex.’

THE CONCEPT: The state acts as per what it this as lawful rather than what the “Rule of Law” says like invoking section 144 without its necessity.

RULE OF LAW AND INDIAN CONSTITUTION

JUDICIAL PRONOUNCEMENTS ON RULE OF LAW

The judicial decisions have played an indispensable role to counter any arbitrariness on part of the state.

The International Congress of Jurists declared that the rule of law “is a dynamic concept which must be employed to safeguard and advance the civil and political rights of an individual in a free society.”

ANALYSIS: PRESENT STATUS OF RULE OF LAW IN INDIA

In India, the Rule of Law is not followed in stricto sensu (“In the strict sense.”). There are several instances:

In fact, the present debate has started due to an increase in the incidences of RULE BY LAW like

Such developments give a feeling of an authoritarian state and not of a democratic state. The CJI in his lecture has also highlighted how the people have largely plaid their role through 17 general elections and have rejected the governments if they have failed to withstand the rule of law. No government is permanent. Hence, it is the duty cast upon the three organs to play their role in upholding the rule of law.

THE CONCLUSION: The work of ensuring complete justice can never be said to be completed. The mandate of our Constitution is to work tirelessly to surpass our expectations, to make India a country wherein rights are cherished, and which sets an example for other countries to follow.

“Desamamte Matti Kadoi, Desamamte ManushulOi”(“A nation is not merely a territory. A nation is essentially its people. Only when its people progress, the Nation progresses”) 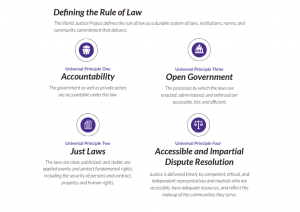 ADDRESSING THE DIGITAL DIVIDE BETWEEN CITIZENS AND THE STATE