THE ISSUE OF INFLATION IN INDIAN ECONOMY

THE CONTEXT: The retail inflation in the Indian economy accelerated in Nov. 2021 towards the upper limit of the RBI’s target range as fruit and vegetable prices rose. There are chances that inflation may rise above 6 percent in early 2022. It is fear that the rising of inflation can impact the recovery of the Indian economy in post-pandemic times. Let us understand the issue of inflation that is impacting the Indian Economy.

TREND OF INFLATION IN INDIA 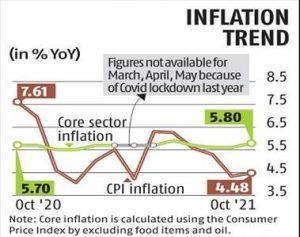 REASONS FOR THE RISING IN INFLATION IN INDIA

ROLE OF RBI IN CONTROLLING INFLATION

The RBI has adopted policies through which it decreases or increases certain rates to control inflation. Hence it is important to understand what these rates are and how they affect inflation.

BRIEF BACKGROUND TO UNDERSTAND THE TOPIC

The current Inflation spike is largely due to seasonal factors and thus will subside in a month or two. However, the major focus should lie in boosting growth so that the country doesn’t enter into a phase of stagflation. The following steps can be taken for boosting growth while controlling inflation.

Supply-side Reforms: Government needs to take steps to boost supply especially of food articles such as vegetables and pulses by bringing more area under cultivation through reclamation of fallow land and increasing productivity.

Prevention of Hoarding and Nexus: Hoarding and nexus between middlemen lead to an increase in inflation without any external factor and harm the interest of consumers. This needs to be prevented through proper monitoring of inflow and outflow of Mandis and through digitalisation of agricultural markets.

Balancing Growth and Inflation: RBI has already cut the interest rates by 135 basis points but has not been passed on to the customer and market due to no change by the banks. Thus, the RBI cannot cut the interest rate anymore for improving growth but we need to focus on banks for better transmission of rates leading to boosting growth.

Structural Reforms: Land, Labour, Agriculture, and taxation need structural reforms so as to improve both the business and agriculture environment.

Regulation: Demonetisation, GST, Automobile policy, E-commerce policy, etc. have all been abrupt policies that impacted the market drastically. A business flourishes when provided with predictable environmental conditions and thus abrupt changes should be avoided. Instead of creating policy on a day-to-day basis, the government should provide the major regulations along with the budget at the start of the fiscal year and should only do minuscule adjustments around the year.

THE CONCLUSION: Indian Economy is suffering from huge challenges of suppressed growth, investment, production while inflation is increasing along with large unemployment figures. In short, all that can go wrong has been going wrong, and thus, there is a need for a predictable growth model for the Indian economy which the government has failed to provide. It is time, that instead of modifying older policies, the government needs to provide a clear model for boosting growth in all primary, secondary and tertiary sectors. Structural reforms need to be undertaken in the land, labour, and capital. Companies need to be provided with predictable regulatory regimes. The market needs to be given time to adjust to policy changes. Judiciary and the legal system need to be sensitized so as to handle economic cases so that the verdict doesn’t threaten the investors. Lastly, agriculture has the biggest multiplier effect on growth and thus agriculture needs to be boosted with long-term policies and not limited to superficial changes in MSP and loan waivers.