THE CONTEXT: NITI Aayog released the fourth edition of the State Health Index for 2019–20. The report, titled “Healthy States, Progressive India”, ranks states and Union Territories on their year-on-year incremental performance in health outcomes as well as their overall status.

What are the indicators? 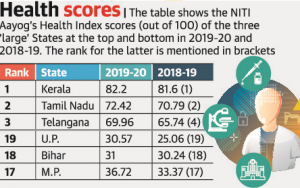 Among large states, Kerala and Tamil Nadu topped the list, and Telangana emerged strong on the third position in health outcomes and incremental performance. The state saw an improvement from the 4th position the last time — indicating that it has made strides in improving its health infrastructure by ensuring universal immunisation of children, setting up fully functional First Referral Units (FRUs) and all Primary Health Centres (PHCs) among others.

Among the ‘Larger States’, in terms of annual incremental performance, Uttar Pradesh, Assam and Telangana are the top three ranking states.

Among UTs, Delhi, followed by Jammu and Kashmir, showed the best incremental performance.

2. RIGHT TO BE FORGOTTEN

THE CONTEXT: In December 2021, the Centre told the Delhi High Court that the “right to be forgotten” is part of the fundamental right to privacy, but added it has no significant role to play in the matter. Petitions across courts have been seeking enforcement of this “right” — a legal principle that is not yet backed by statute in India. 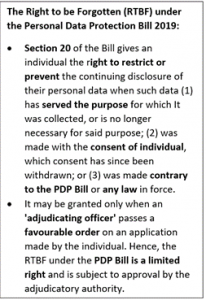 What is the right to be forgotten?

Which countries have such laws?

What is the position in India?

In a brief reply in one of the petitions earlier this week, the Centre told the Delhi High Court that the right to privacy has been recognised as a fundamental right in the K S Puttaswamy judgment (2017) and that the ‘right to be forgotten’ is evolving in India. The government said the Personal Data Protection Bill (a Joint Parliamentary Committee’s report on which was tabled on December 2021), contains provisions to the doctrine of the ‘right to be forgotten’. 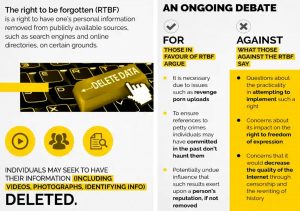 When can the right be exercised?

In the right to privacy judgment, the Supreme Court had clarified that the recognition of this right “does not mean that all aspects of earlier existence are to be obliterated, as some may have a social ramification”.

The SC explained: “If we were to recognise a similar right, it would only mean that an individual who is no longer desirous of his personal data to be processed or stored, should be able to remove it from the system where the personal data/information is no longer necessary, relevant, or is incorrect and serves no legitimate interest.”

The apex court asserted that this right cannot be exercised where the information or data is necessary for:

CONCLUSION: Although the RTBF is a facet of the right to privacy, it has become very important in the digital age. The times when information is available at a click, the need to protect personal data becomes all the more important. Personal data such as related to matrimonial suits are of no relevance to the public. However, due to lack of proper legislation recognising this right people are subjected to harassment and loss of reputation. Therefore, legislation protecting this right is the need of the hour. Until then, the task is left to the judiciary which has to carefully tread its path between two fundamental rights- RTBF and freedom of expression.

3. TUSSLE OVER FCRA AND MISSIONARIES OF CHARITY (MoC)

THE CONTEXT: According to Union Home Ministry (MHA), the FCRA (Foreign Contribution Regulation Act) licence of Missionaries of Charity founded by Mother Teresa wasn’t renewed as some adverse inputs were received against it.

4. AIR POLLUTION IN CENTRAL-WESTERN INDIA AND NORTH INDIA IN CONTRAST TO THE GENERAL TREND

THE CONTEXT: According to the study published in ‘Environmental Science and Pollution Research, by the Aryabhatta Research Institute of Observational Sciences (ARIES) showed that reduction of economic activities during the pandemic-related lockdown had resulted in decrease of air pollution in most parts of India, but satellite observations show that parts of central-western India and north India showed an increase in pollution in contrast to the general trend. 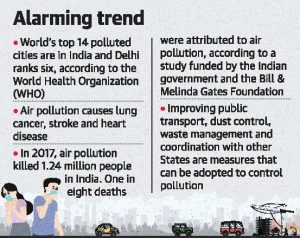 The six common air pollutants are:

THE CONTEXT: In early December 2021, the import of Iranian kiwis from Afghanistan to India has posed a major concern for apple dealers in Kashmir following a contagious quarantine pest threat found. 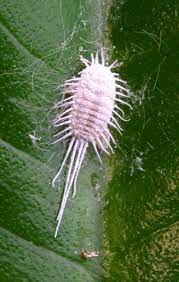 THE CONTEXT: According to the Department of Telecommunications (DoT) Delhi, Gurgaon, Mumbai, Bengaluru, Kolkata, Ahmedabad, Hyderabad, and Pune will be the first places to get 5G services next year i.e 2022.

What is 5G technology and how is it different?

Where does India stand in the 5G technology race? 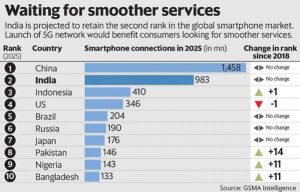 What is the global progress on 5G? 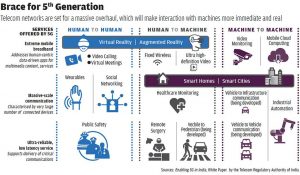 Q1. In the context of Colonial India, Shah Nawaz Khan, Prem Kumar Sehgal and Gurbaksh Singh Dhillon are remembered as:

a) leaders of Swadeshi and Boycott Movement

b) members of the Interim Government in 1946

c) members of the Drafting Committee in the Constituent Assembly