THE INDIAN ART, CULTURE AND HERITAGE

THE CONTEXT: Durga Puja in Kolkata, one of largest cultural carnivals and street art festival of the country, received an important international recognition by making it to UNESCO’s Representative List of the Intangible Cultural Heritage of Humanity.

2. DEMAND FOR INCLUSION OF LADAKH IN THE SIXTH SCHEDULE

THE CONTEXT: Recently, a Member of Parliament from Ladakh demanded that the region be included in the Sixth Schedule of the Constitution to safeguard land, employment, and cultural identity of the local population.

What is the Sixth Schedule?

The Sixth Schedule applies to the Northeastern states of Assam, Meghalaya, Mizoram (three Councils each), and Tripura (one Council).

Why does Ladakh want to be part of the Sixth Schedule?

There was much enthusiasm initially, mostly in Leh, after the August 5, 2019 decisions that created two new Union Territories. Buddhist-dominated Leh district had long demanded UT status because it felt neglected by the erstwhile state government, which was dominated by politicians from Kashmir and Jammu.

The UT has two Hill councils in Leh and Kargil, but neither is under the Sixth Schedule. Their powers are limited to collection of some local taxes such as parking fees and allotment and use of land vested by the Centre.

Voices from the ground:

In Kargil district, which is dominated by Shia Muslims, demands have been raised for the restoration of special status — also for a merger with the UT of J&K which has been provisioned a legislature. Representatives of social, religious, and political groups in Kargil have come together under the banner of the KDA.

Can Ladakh be included in Sixth Schedule?

In September 2019, the National Commission for Scheduled Tribes recommended the inclusion of Ladakh under the Sixth Schedule, noting that the new UT was predominantly tribal (more than 97%), people from other parts of the country had been restricted from purchasing or acquiring land there, and its distinct cultural heritage needed preservation.

According to Home Ministry. “The Ladakh’s inclusion in the Sixth Schedule would be difficult. The Constitution is very clear, Sixth Schedule is for the Northeast. For tribal areas in the rest of the country, there is the Fifth Schedule”.

However, it remains the prerogative of the government — it can, if it so decides, bring a Bill to amend the Constitution for this purpose.

THE CONTEXT: According to a report by the State Centre on Climate Change Shimla and Space Application Centre of the ISRO in Ahmedabad said, that the Himachal Pradesh, a state that has five important perennial rivers fed particularly by glaciers, has witnessed a decline in snowfall over the past year. The area under snow cover in the state has declined by 18.5% between 2019-’20 and 2020-’21.

Another study published in 2019 said that the Sutlej River basin glaciers are melting fast and may shrink significantly by as soon as 2050. The research estimates that the melting would cause 33% of the glaciers to disappear by 2050 and 81% by the end of the century. 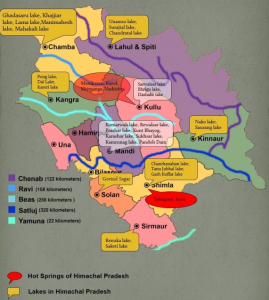 Not only Himachal, glaciers in Jammu, Kashmir and Ladakh are also melting at a significant rate. According to a 2020 study, over 1,200 glaciers in the region saw an annual reduction in mass of 35 centimetres on average between 2000 and 2012. The study added that the glaciers have reduced from 102 sq km in 1980 to 72 sq km in 2018 showing a recession 28.8% decrease.

The Ganges River system in the Indian Himalayas can be divided into four major river basins i.e the Yamuna, Bhagirathi, Alaknanda and Ghaghara River Basins. The Ganges River system remains the main source of fresh water for half the population of India and Bangladesh and nearly the entire population of Nepal. Reports also mention a decline in snow cover of the Brahmaputra basin.

According to a study Glacio-hydrology of the Himalaya-Karakoram by Ministry of Science and Technology, snow and glaciers are melting rapidly in the Himalayan range due to climate change, altering water supplies in the rivers like Indus, Ganga and Brahmaputra in the Himalaya-Karakoram ranges. Total river runoff, glacier melt and seasonality of flow in these rivers are projected to increase until the 2050s, with some exceptions and large uncertainties.

The five holy places of PanchPrayag include: 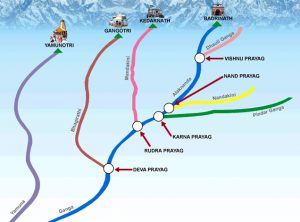 THE CONTEXT:The Prime Minister highlighted the importance of Zero Budget Natural Farming and, he called for the method to become a mass movement.

What is Zero Budget Natural Farming?

ZBNF is a method of chemical-free agriculturedrawing from traditional Indian practices. It was originally promoted by agriculturist and Padma Shri recipient Subhash Palekar, who developed it in the mid-1990s as an alternative to the Green Revolution’s methods driven by chemical fertilizers, pesticides and intensive irrigation.

What is it and how did it come about?

According to Subhash Palekar, he argued that the rising cost of these external inputs was a leading cause of indebtedness and suicide among farmers, while the impact of chemicals on the environment and on long-term fertility was devastating. Without the need to spend money on these inputs — or take loans to buy them — the cost of production could be reduced, and farming made into a “zero budget” exercise, breaking the debt cycle for many small farmers.

What is the method?

A similar mixture, called bijamrita, is used to treat seeds, while concoctions using neem leaves and pulp, tobacco and green chillis are prepared for insect and pest management.

The ZBNF method also promotes soil aeration, minimal watering, intercropping, bunds and topsoil mulching and discourages intensive irrigation and deep ploughing. Mr. Palekar is against vermicomposting, which is the mainstay of typical organic farming, as it introduces the most common composting worm, the European red wiggler (Eisenia fetida) to Indian soils. He claims these worms absorb toxic metals and poison groundwater and soil.

A limited 2017 study in Andhra Pradesh claimed a sharp decline in input costs and improvement in yields. However, reports also suggest that many farmers, including from Mr. Palekar’s native Maharashtra, have reverted to conventional farming after seeing their ZBNF returns drop after a few years, in turn raising doubts about the method’s efficacy in increasing farmers’ incomes.

ZBNF critics, including some experts within the central policy and planning think tank NITI Aayog, note that India needed the Green Revolution in order to become self-sufficient and ensure food security. They warn against a wholesale move away from that model without sufficient proof that yields will not be affected. Sikkim,(First organic state in India) which has seen some decline in yields following a conversion to organic farming, is used as a cautionary tale regarding the pitfalls of abandoning chemical fertilizers.

Which are the States with big plans?

Need of the hour:

While harnessing the advantages of the prescribed natural inputs, it is also important to explore the feasibility of alternatives in case of inaccessibility to critical inputs. Considering the Government’s interest in promoting ZBNF at the national level, the extent of its sustainability needs to be critically monitored in the next few years. An extensive study with a larger sample size and a few demonstration units in small pockets of monitored agricultural land is recommended.

As the prescribed guidelines for ZBNF are similar for all crops and agro-climatic conditions, the single-solution applicability of natural ingredients needs to be tested for all crops and soil types. Close monitoring of the soil health during and after transition would allow us to understand the long-term impact of the practice. 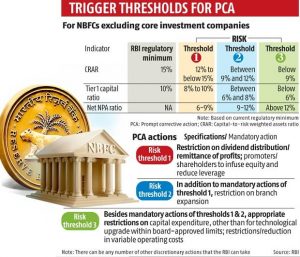 What is Prompt Corrective Action (PCA)?

THE CONTEXT: A World Trade Organization panel ruled that India violated international trade rules when it offered excessive subsidies for the production and export of sugar and sugarcane.

The dispute dates back to 2019 when Brazil, Australia and Guatemala filed parallel WTO complaints that alleged the Indian government massively increased its sugar subsidies and reintroduced a minimum price for sugar, which led to increased production of sugar that outstripped domestic demand. 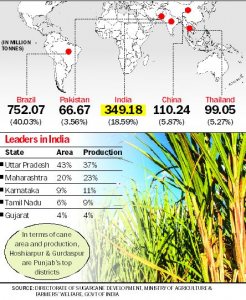 According to Brazil’s complaint, during the 2018-2019 growing season, India approved dozens of federal and state-level assistance programs for the sugar industry that collectively exceeded 55 billion rupees ($730 million).

AoA is aimed to remove trade barriers and to promote transparent market access and integration of global markets. Agreement on agriculture has three components:

Under this, Subsidies are categorized into three parts:

THE CONTEXT: In an attempt to push Semiconductor manufacturing within the country, the Union Cabinet,cleared a Rs 76,000 crore production-linked incentive scheme (PLI) for semiconductor and display manufacturers to make the country an electronic system design and manufacturing global hub. 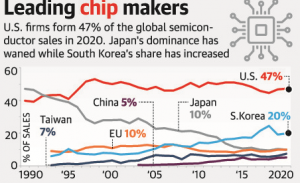 What is the need?

Semiconductors and displays are the foundation of modern electronics driving the next phase of digital transformation under Industry 4.0. Semiconductors and display manufacturing is very complex and technology-intensive sector involving huge capital investments, high risk, long gestation and payback periods, and rapid changes in technology, which require significant and sustained investments.

Following broad incentives have been approved for the development of semiconductors and display manufacturing ecosystem in India: 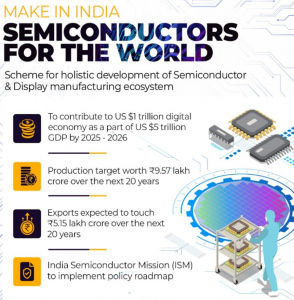 What is a Semiconductor? 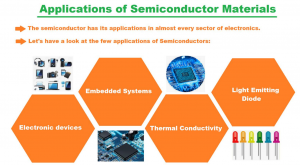 1.Consider the following are in the UNESCO intangible heritage sites:

Which of the statements given above are incorrect?