THE CONTEXT: The Indian government has finalized an air bubble agreement with Australia, which will allow all eligible passengers to travel between the two countries.

What is Air Bubble Agreement?

THE CONTEXT: India is awaiting responses from leaders of ﬁve Central Asian nations to an invitation to attend as chief guests of Republic Day, with the details expected to be ﬁnalised during a ministerial-level meeting of the India-Central Asia Foreign Ministers’ dialogue (third India-Central Asia Dialogue).

THE CONTEXT: According National Academies of Sciences, Engineering and Medicine report, the US produces a large share of the global supply of plastic resin – the precursor material to all plastic industrial and consumer products. It also imports and exports billions of dollars’ worth of plastic products every year.

According to IUCN, the most visible impacts of plastic debris are the ingestion, suffocation and entanglement of hundreds of marine species. Marine wildlife such as seabirds, whales, fish and turtles mistake plastic waste for prey; most then die of starvation as their stomachs become filled with plastic.

How India can face the tidal wave of marine plastic

THE CONTEXT: The Centre has approached the Supreme Court seeking modification of its order directing that all transmission cables in the habitat of the Great Indian Bustard (GIB) be laid underground, saying that the area falling in Rajasthan and Gujarat contains a large proportion of the country’s total solar and wind energy potential and the process will escalate the cost of renewable energy production and hurt India’s renewable energy cause. 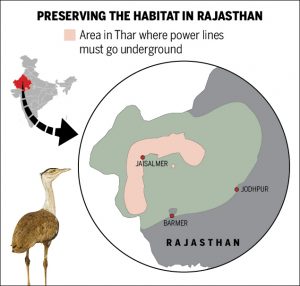 THE CONTEXT: Recently, several banks have entered into co-lending ‘master agreements’ with NBFCs, and more are in the pipeline. This, however, has come in for criticism from several quarters.

What is Co-Lending Model?

How does a co-lending model work?

Difference between Banks and NBFCs:

THE CONTEXT: A supersonic missile-assisted torpedo system (SMART) developed by the Defence Research and Development Organisation (DRDO) was successfully launched from Wheeler Island in Odisha.

What is Supersonic Missile?

THE CONTEXT: According to WHO, the novel coronavirus disease (COVID-19) pandemic disrupted global health services and dealt a debilitating blow to people’s “ability to obtain healthcare and pay for it”.

Around half a billion people were pushed into extreme poverty because they had to pay healthcare costs. A wide gap in affordable healthcare access, combined with reduced income can exacerbate crisis.

Q1. Which of the following index is not compiled by Labour Bureau in the Ministry of Labour and Employment?

a) CPI for Industrial Workers (IW)

b) CPI for Agricultural Labourer (AL)