THE CONTEXT: According to the Ministry of Home Affairs, that there is no proposal under consideration to scrap Section 124A of the Indian Penal Code, 1860. Further, the question of law regarding Section 124A is pending for adjudication before the Supreme Court of India.

What is the controversy? 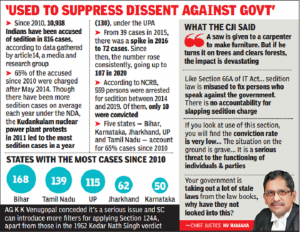 Trials of Tilak and Gandhi

Arguments For Section 124A

Arguments Against Section 124A

THE CONTEXT: A controversy has erupted in Kerala over the reappointment of Vice Chancellor of Kannur University, with Kerala Governor saying he approved the decision against his “better judgement” as Chancellor. In a letter to Chief Minister, Governor expressed his desire to step down as Chancellor, alleging political interference in the universities.

What is the role of Governors in state universities?

What about central universities?

THE CONTEXT: A group of Opposition MPs in Sri Lanka, representing Tamils from the north and east, hill country (Malaiyaha Tamils), and Tamil-speaking Muslims sought the full implementation of the 13th Amendment to ensure “existing rights are not snatched away”.

What is the Accord?

Why the 13th Amendment contentious?

India has always emphasised on a meaningful devolution package, based on the 13th Amendment. India’s interest is not only cultural but also demographic as around 1 lakh Tamil refugees are living in India. Until a political reconciliation is achieved in Sri Lanka, return of these refugees will not be possible.

THE CONTEXT: Voters in the French island territory of New Caledonia chose overwhelmingly to stay part of France, in a referendum boycotted by pro-independence forces. 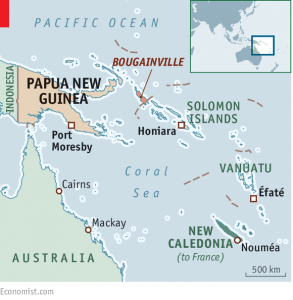 The French Overseas Territories cover almost 120 000 km² and are home to more than 2.6 million people.

THE CONTEXT: A camera trap set up at Buxa Tiger Reserve (BTR) in Alipurduar district of West Bengal have captured a sight of Royal Bengal Tiger, that the region has not witnessed in more than two decades. 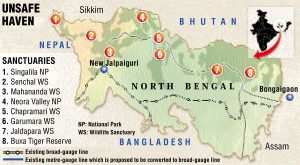 The Royal Bengal Tiger belongs to specific population of the Panthera tigris tigris subspecies, which is native to the Indian subcontinent. The tiger is threatened by poaching and fragmentation of habitat. India’s tiger population was 2,967 in 2019. 300–500 tigers are found in Bangladesh, 220–274 in Nepal while 103 tigers in Bhutan. In the red list of IUCN, it has been list into Endangered category.

THE CONTEXT: Recently, Sakkarbaug zoo of Junagadh in Gujarat as three of its Asiatic lionesses have given birth to 13 cubs.

The Sakkarbaug Zoological Garden is a 210-acre facility that provides pure-bred Asiatic lions for the Indian and international endangered species captive-breeding programme. Wild, free-ranging Asiatic lions have become extinct in most parts of Asia and are now found only in and around the Gir Forest.

However, it is important to note that, Sakkarbaug Zoo of Junagadh is the only breeding centre in the world for Asiatic lions, and the Gir Forest, the Asiatic lion population went to 674 in 2020.”

Over the last several years, the lion population in Gujarat has been steadily rising.

This is powered by: 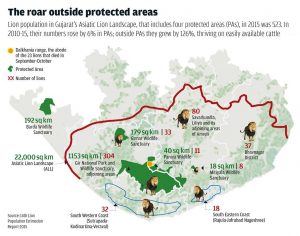 THE CONTEXT: According to the Ministry of Environment, forest, and climate change, between 2018 and 2020, about 2,054 cases were registered for killing or illegal trafficking of wild animals in India.

Under the Wildlife (Protection) Act, 1972, WCCB is mandated to

THE CONTEXT: “The DRDO, along with the Army, conducted a series of performance evaluation trials. In these trials, enhanced range Pinaka rockets were test-fired at different ranges with various warhead capabilities. All the trial objectives were met satisfactorily. 24 rockets were fired for different ranges and warhead capabilities to meet the objectives of accuracy and consistency.”

Also stated with this, the initial phase of technology absorption of the Pinaka-ER (Enhanced Range) by the industry partner has successfully been completed, making the upgraded rocket system ready for production.

The Pinaka-ER is the upgraded version of the earlier Pinaka, which has been in service with the Indian Army for the last decade. The system has been designed in light of emerging requirements with advanced technologies. The extended range of the new Pinaka is over 70 km, as opposed to the 45 km the system currently has.

9. AI TOOL TO SIMPLIFY IDENTIFICATION OF CANCEROUS TISSUE IN TUMOURS

THE CONTEXT: IIT Madras researchers developed this tool using deep learning and traditional machine learning to develop a tool that can diagnose cancer by looking at whole slide images of the tumour. The tool has been tested on datasets of breast, liver and colon cancer tissue images.

Q1. Which of the following pairs of French overseas territory is incorrectly matched?

Select the correct answer using codes given below?