THE CONTEXT New Zealand has announced it will outlaw smoking for the next generation so that those who are aged 14 and under will never be legally able to buy tobacco.

THE IMPACT OF GLOBAL WARMING ON THE ATMOSPHERE

THE CONTEXT: According to the Ministry of Earth Sciences, the number of Cyclones and the Number of stations reported very heavy and extremely heavy rainfall events have increased in recent years.

Oxygen makes up one-fifth of the air we breathe, and few recent studies reported declining oxygen content in the atmosphere due to the burning of fossil fuels, population growth and deforestation. However, the loss of oxygen is negligible when compared to its abundance in the atmosphere and it is also found that the ecosystem is compensating for some of the loss.

Ministry of Earth Sciences has the mandate only to provide forecasts and early warnings. However, as an adaptive measure to minimize the effects of increasing temperatures, IMD in collaboration with local health departments have started a heat action plan in many parts of the country to forewarn about the heat waves and also advise action to be taken during such occasions.  The heat action plan became operational in 2013. 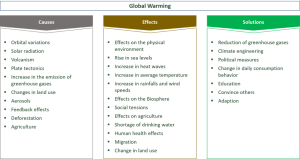 The Heat Action Plan is a comprehensive early warning system and preparedness plan for extreme heat events. The Plan presents immediate as well as longer-term actions to increase preparedness, information-sharing, and response coordination to reduce the health impacts of extreme heat on vulnerable populations. NDMA and IMD are working with 23 states prone to high temperatures at present with respect to the heat action plans.

THE CONTEXT: The United Nations Convention on Biological Diversity’s Aichi targets to set goals for each country to create protected areas in 2010, and roughly 15 per cent of the world’s land surface is under official state protection. Protected areas have largely been able to reduce deforestation. 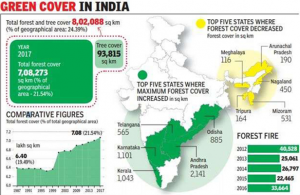 What are Aichi Targets?

The ‘Aichi Targets’ were adopted by the Convention on Biological Diversity (CBD) at its Nagoya conference. It is a short term plan provides a set of 20ambitious yet achievable targets, collectively known as the Aichi Targets. They can be divided into:

THE CONTEXT: Recent trends suggest that smugglers of exotic wildlife species might be trying to take advantage of the advisory brought out by the Ministry of Environment, Forest & Climate Change (MoEF&CC) to regulate the growing market of exotic animals in the country.

What is the government’s voluntary disclosure scheme? 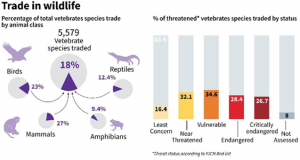 How big a problem is the illegal trade of exotic animals in India?

The Directorate of Revenue Intelligence (DRI), which enforces anti-smuggling laws,  stated India has emerged as a big demand centre for exotic birds and animals with an increase in the smuggling of endangered species from different parts of the world. Most of this exotic wildlife is imported through Illegal channels and then sold in the domestic market as pets.

What kind of exotic wildlife are covered?

The advisory has defined exotic live species as animals named under Appendices I, II and III of the CITES. It does not include species from the Schedules of the Wild Life (Protection) Act 1972. The advisory excludes exotic birds from the amnesty scheme.

CITES (Convention on International Trade in Endangered Species of Wild Fauna and Flora):

Identification of beneficiaries eligible for assistance and their prioritisation to be done using information from Socio Economic and Caste Census (SECC) ensuring total transparency and objectivity. The list will be presented to Gram Sabha to identify beneficiaries who have been assisted before or who have become ineligible due to other reasons.

Q1. Which of the following is incorrectly matched?