THE CONTEXT: From this year, the Karnataka government has decided to celebrate ‘Onake Obavva Jayanti’ on November 11 throughout the state.

THE CONTEXT: The Supreme Court reserved its judgment on an appeal by the Ministry of Defence (MoD) for relaxing its September 2021 order that specified the road width under the Char Dham Mahamarg Vikas Pariyojana (Char Dham Highway Development Project) of the Ministry of Road Transport and Highways (MoRTH). 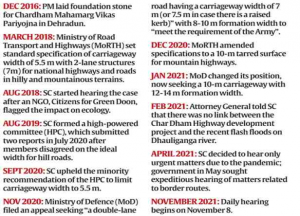 THE CONTEXT: Group of developing countries that includes India and China has rejected the first draft of the expected agreement from the Glasgow climate conference and asked for changing the entire section on enhancing mitigation actions.

THE CONTEXT:  India has demanded a trillion dollars over the next decade from developed countries to adapt to, and mitigate, the challenges arising from global warming, and has kept this as a condition for delivering on climate commitments made by PM.

THE CONTEXT: Civil Aviation Minister launched eGCA (e-Governance in Directorate General of Civil Aviation). The project aimed at automation of the processes and functions of DGCA.

THE CONTEXT:  A 15-year-old girl from Tamil Nadu, who was recognized Earth Day Network Rising Star 2021 (USA) for her idea of ‘Solar Ironing Cart’, has exhorted the world to move towards clean energy during the recently concluded COP 26.

THE CONTEXT:  On November 24, NASA will launch the agency’s first planetary defence test mission named the Double Asteroid Redirection Test (DART). The main aim of the mission is to test the newly developed technology that would allow a spacecraft to crash into an asteroid and change its course.

THE CONTEXT:  A new study has challenged the widely accepted view that the continents rose from the oceans about 2.5 billion years ago. It suggests this happened 700 million years earlier — about 3.2 billion years ago — and that the earliest continental landmass to emerge may have been Jharkhand’s Singhbhum region. The study, by researchers from India, Australia and the US, has been published in the journal PNAS.

Q1.  Famous women warrior of the 18th century, Onake Obavva, is related to which region of India?