THE CONTEXT:  Union Minister of Home Affairs and Cooperation launched the “Dairy Sahakar” scheme at Anand, Gujarat, during the function organised by Amul for the celebration of the 75th Foundation Year of Amul.

THE CONTEXT: No time-bound agreements were reached as leaders of the world’s top economies ended the summit in Rome, recommitting to providing $100 billion a year to counter climate change, and pushing for greater vaccine equality to fight the COVID-19 pandemic.

THE CONTEXT: A day ahead of the commencement of COP 26, India has officially endorsed a website ‘Climate Equity Monitor’, made by Indian climate experts, that lists the historical carbon dioxide emissions of developed countries.

THE CONTEXT: The census of the Indus river dolphin (Platanista gangetica minor), a freshwater dolphin found in the Beas River, is slated to begin this winter as part of a Centre project. Punjab’s wildlife preservation wing, on the other hand, has gone above and above to conserve not only the dolphins but also their natural habitat.

THE CONTEXT: The first ship of the four Project-15B state-of-the-art stealth guided-missile destroyers, Visakhapatnam, being built at the Mazgaon Docks Limited (MDL), was delivered to the Navy. Delayed by three years, the ships will be commissioned very soon.

THE CONTEXT: Amidst the growing energy needs and changing global climate landscape, the Government of India has identified new areas to achieve higher levels of penetration of Renewable energy by proposing certain Amendments to Energy Conservation Act, 2001.

7. GOI IS COMMITTED TO RELEASE FUNDS FOR THE MGNREGA SCHEME

THE CONTEXT: The government of India is committed to release funds for wage and material payments for proper implementation of the Mahatma Gandhi NREGA scheme. 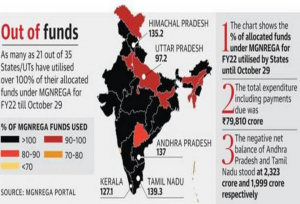 THE CONTEXT: Ministry of Rural Development launched an initiative to enable rural SHG women to earn at least Rs.1 lakh per annum.

THE CONTEXT: The 17th Edition of Indo-US joint exercise “Ex Yudh Abhyas 2021”, the joint military training between Indian and the US Armies concluded at Joint Base Elmendorf Richardson, Alaska on 29 October 2021.

Q1 Consider the following statements about the Indus dolphins:

A conjugate vaccine is a type of vaccine which combines a weak antigen with a strong antigen as a carrier so that the immune system has a stronger response to the weak antigen.