3. GUIDE FOR SAFE RESCUE AND RELEASE OF GANGES RIVER DOLPHINS

THE CONTEXT: The Jal Shakti Ministry released a guide for the safe rescue and release of stranded Ganges river dolphins. 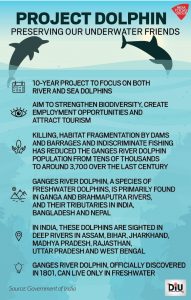 5. STATEMENT ON BEHALF OF BASIC COUNTRIES AT COP26

THE CONTEXT: Union Minister for Environment, Forest and Climate Change, delivered the statement on behalf of the BASIC group of countries, comprising Brazil, South Africa, India and China at the UN Climate Change Conference underway at Glasgow.

THE CONTEXT: Government of India has constituted a 20 member Empowered Group of Secretaries (EGoS), which will be a monitoring mechanism for the development and implementation of the PM Gati Shakti National Master Plan (NMP).

THE CONTEXT: GST collection for October 2021 registered the second highest since implementation of GST.

THE CONTEXT: The key findings of a study led by IIT Kharagpur researchers could help us understand the formation and evolution of the Earth.

THE CONTEXT: PM met PM of the United Kingdom, the Boris Johnson MP on the sidelines of the COP26 World Leaders Summit in Glasgow.

Q1. Which of the following are among India’s commitments made at COP26?