THE CONTEXT:  A special court in Mumbai denied bail to Aryan Khan, even though the Narcotics Control Bureau (NCB) did not find any drugs on him during his arrest on October 3 after a raid on a cruise ship off Mumbai. The court rejected his bail application on the ground that he had “conscious possession” of drugs.

2. DATA ON EXPORT OF RICE FROM INDIA

THE CONTEXT: About 500 tonnes of broken rice imported from India were claimed to be genetically modified (GM) by a French manufacturer. This has drawn sharp reactions from the European countries as the European Union (EU) does not permit GM rice. An American company recalled four of its product lines fearing GM contamination. Data show that rice exports form the fifth-highest share in terms of India’s total exports. India is also the biggest exporter of rice globally, forming over 30% of the world’s exports. However, less than 5% of the rice exported from India is destined for the European countries. But for many European countries, India is their primary source for rice imports. 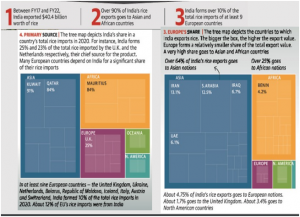 THE CONTEXT: At a farmer’s house in Gujarat’s Gir Somnath district, India’s first in-vitro fertilisation (IVF) calf of the Banni breed of buffaloes was born.

4. ONE IN THREE SPECIES OF SHARKS AND RAYS IS NEARING EXTINCTION

THE CONTEXT: Sharks, rays and chimaeras are now the second-most threatened vertebrate group, after amphibians. In a recent study, we found that over one-third of sharks and rays are threatened with extinction.

THE CONTEXT: Even as the southwest monsoon began to retreat from the subcontinent, Kerala and Uttrakhand received record rainfall in October. In both these States over the last few years, there have been variations in the pattern and intensity of rainfall.

THE CONTEXT: A female leopard, rescued from a forest in Madhya Pradesh’s Raisen district over two months back, has now been released in the Satpura Tiger Reserve in Hoshangabad district.  It was subsequently brought to Bhopal’s Van Vihar National Park where it was treated by a team of veterinarians. 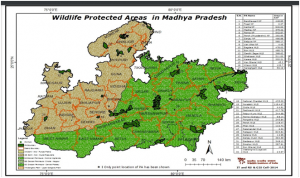 THE CONTEXT: China’s legislature has adopted a new border law, to take effect on January 1, that calls on the state and military to safeguard the territory and “combat any acts” that undermine China’s territorial claims.

Q1. Which of the following Tiger reserve is not located in Madhya Pradesh?

Q2. Which community/tribe is dedicated to preserving banni breed of buffalo