THE CONTEXT:  A total of 152 Centre for Financial Literacy & Service Delivery (SAKSHAM Centres) across 77 districts of 13 states launched under Deendayal Antyodaya Yojana – National Rural Livelihoods Mission (DAY-NRLM) of the Ministry of Rural Development.

THE CONTEXT:  The month-long winter session of Parliament is likely to commence from the fourth week of November.

THE CONTEXT: With the arrival of the migratory Amur falcons to Tamenglong district of Manipur for the annual stopover, State Forest and Environment Minister has appealed to the people not to hunt the seasonal visitors.

THE CONTEXT:   According to sources, India hasn’t entirely ruled out on the possibility of agreeing to a ‘net zero’ target 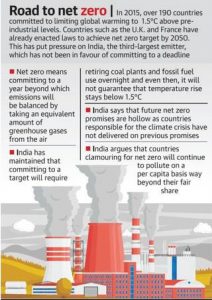 5. PLASTIC POLLUTION IN AQUATIC SYSTEMS MAY TRIPLE BY 2040

THE CONTEXT: A new report by the United Nations Environment Programme (UNEP) has rung alarm bells: The amount of plastics in the oceans has been estimated to be around 75-199 million tonnes at present. Without meaningful action, emissions of plastic waste into aquatic ecosystems are projected to nearly triple by 2040.

THE CONTEXT: The United States has categorized India as a ‘country of concern’ along with 10 others that in the assessment of the American intelligence community will bear the brunt of global warming that could include intensifying and more frequent heatwaves and droughts and water and power scarcity.

THE CONTEXT: The independent Congressional Research Service (CRS) said that although the U.S., Russia and China possess the most advanced hypersonic weapons programmes, a number of other countries, including Australia, India, France, Germany and Japan, are also developing hypersonic weapons technology.

THE CONTEXT: U.K. Foreign Secretary Elizabeth Truss said relation between the United Kingdom and India is vital over the coming decades. Ms Truss is on a three-day visit to India.

Which of the statements given above are correct?