THE CONTEXT: A report from the World Meteorological Organization (WMO) said the increase in CO2 from 2019 to 2020 was slightly lower than that observed from 2018 to 2019 but higher than the average annual growth rate over the last decade.

THE CONTEXT: Ahead of the 26th meeting of the Conference of Parties (COP) next month in Glasgow, there have been several bilateral meetings between India and other countries. The big push at the COP will be to have more countries commit to a “net-zero” deadline by mid-century. Huge expectations include arriving at a consensus on unresolved issues of the Paris Agreement Rule Book, long-term climate finance and market-based mechanisms

WHY HASN’T INDIA AGREED TO A NET-ZERO TARGET?

WHAT ARE INDIA’S EXPECTATIONS FROM COP 26?

THE CONTEXT: The Supreme Court directed the Supervisory Committee to take an immediate and firm decision on the maximum water level that can be maintained at Mullaperiyar dam amidst torrential rains in Kerala.

5. THE SUPERIORITY OF HYBRID IMMUNITY 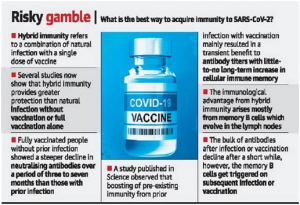 Buffaloes from Banni are also called “Kutchi” or “Kundi.” The Kutch area of Gujarat is home to this kind of buffalo. The term ‘Banni’ refers not just to buffaloes, but also to pasture grass species native to this region. The ‘Maldharis,’ a Kutch-based community, is dedicated to preserving this breed of buffalo.