THE CONTEXT: The Cabinet Committee on Economic Affairs (CCEA) has approved PM GatiShakti National Master Plan including an institutional framework for rolling out, implementation, and monitoring and support mechanism for providing multi-modal connectivity.

THE CONTEXT: India Internet Governance Forum to be conducted in November 2021 to bring all stakeholders of internet governance on a single platform.

3. SUCCESS STORY OF VACCINATION IN INDIA

THE CONTEXT: India has completed vaccination of 100 crore doses on October 21, 2021, in just about nine months since starting vaccination. 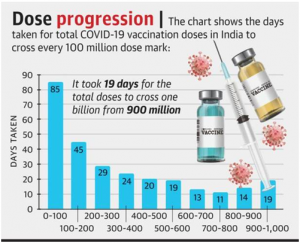 THE CONTEXT: The Central Empowered Committee (CEC), constituted by the Supreme Court, has asked the Assam government to act on illegal construction in the identified wildlife corridors of the Kaziranga National Park and Tiger Reserve.

THE CONTEXT: Indian Railways is taking a multi-pronged approach to go green and decarbonise — from increasing its sourcing of renewable energy (RE) to electrifying its traction network and reducing its energy consumption. Its goal is to become a ‘net-zero’ carbon emitter by 2030. And it has ambitious plans to accomplish this goal.

THE CONTEXT: The Financial Action Task Force (FATF) retained Pakistan in the ‘greylist’ yet again, observing that it needed to further demonstrate that investigations and prosecutions were being pursued against the senior leadership of U.N.-designated terror groups, which include Lashkar-e-Taiba, Jaish-e-Mohammed, al-Qaeda and the Taliban.