THE CONTEXT: Health ministry sources said that the subject expert committee on Covid-19 vaccines has recommended the national drug regulator to grant an emergency use authorisation to Bharat Biotech’s Covaxin for the age group of 2 to 18 years.

2. THE CONTINUATION OF SBM U

THE CONTEXT:  The Union Cabinet approved the continuation of Swachh Bharat Mission (Urban) till 2025-26, with a focus on sustainability of Open Defecation Free (ODF) outcomes, achieving scientific processing of Solid Waste in all cities, and managing Wastewater in cities with less than 1 lakh population in Census 2011 [cities not covered under Atal Mission for Rejuvenation and Urban Transformation (AMRUT)].

THE CONTEXT:  The Union Cabinet approved the Atal Mission for Rejuvenation and Urban Transformation 2.0 (AMRUT 2.0) till 2025-26, as a step towards AatmaNirbhar Bharat and with aim of making the cities ‘water secure’ and ‘self-sustainable through circular economy of water.

THE CONTEXT:  According to an analysis by Down To Earth, the northeastern region of India lost 79 per cent of its tree cover in 2020, recording the biggest dip in the country. 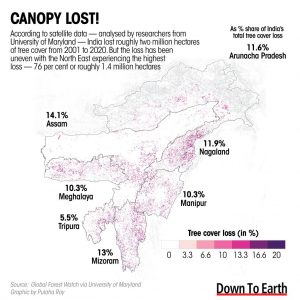 THE CONTEXT:   China pledged to inject $233 million into a new fund to protect biodiversity in developing countries during a key UN conservation summit, despite disagreements among major donors on the initiative.

THE CONTEXT:  India’s retail inflation cooled off to a five-month low of 4.35% in September, thanks to a sharp dip in food price inflation, while industrial output growth accelerated to 11.9% in August. 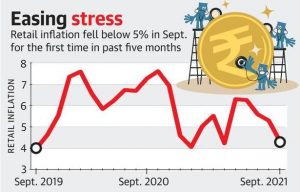 THE CONTEXT:   The Environment Ministry has issued draft rules that mandate producers of plastic packaging material to collect all of their produce by 2024 and ensure that a minimum percentage of it be recycled as well as used in subsequent supply.

PRELIMS PRACTICE QUESTIONS FOR THE DAY

Q1. Consider the following statement about the Kunming biodiversity fund: