THE CONTEXT: Future elections in Telangana could witness a major change in the voting process, with the state government gearing up for a dry run of the first-ever smartphone-based e-voting system in the country.

2. KILLING OF MINORITIES A THREAT TO DEMOCRATIC FABRIC OF INDIA: NHRC

THE CONTEXT:  The National Human Rights Commission has issued notices to the Jammu and Kashmir government and police over the recent spate of targeted killings of civilians from minority communities. They are an attempt to keep non-Muslims out of the Valley.

3. PUNJAB GOVERNMENT PROPOSAL TO USE PADDY STRAW AS CATTLE FEED

THE CONTEXT:  Producing over 20 million tonnes of paddy straw every year, most of which is burnt in fields by farmers, leading to widespread air pollution, Punjab has now proposed to use the paddy crop residue as fodder for animals.

THE CONTEXT:   A recent study has identified 114 priority talukas/tehsils where habitats can be consolidated to enhance population connectivity for the dhole or Asiatic Wild Dog (Cuonalpinus), a Schedule II species under the Wildlife (Protection) Act, 1972.

THE CONTEXT: India has received the third set of Swiss bank account details of its nationals under automatic exchange of information pact with Switzerland, as part of an annual exercise under which the European nation has shared particulars of nearly 33 lakh financial accounts with 96 countries.

THE CONTEXT: Three US-based economists won the 2021 Nobel Prize for economics for pioneering research on the labour market impacts of minimum wage, immigration and education, and for creating the scientific framework to draw conclusions from such studies that can’t use traditional methodology. 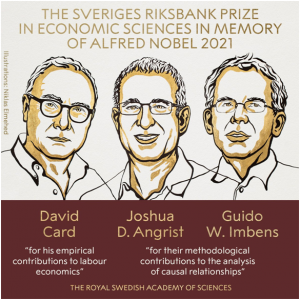 PRELIMS PRACTICE QUESTIONS FOR THE DAY