THE CONTEXT: The Ministry of Women and Child Development has issued the detailed guidelines for the PM CARES for Children Scheme. 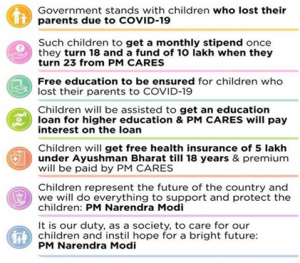 2. 40% OF SCHOOL CHILDREN DON’T HAVE ACCESS TO DIGITAL DEVICES

THE CONTEXT: The report, Initiatives by the School Education Sector in 2020-21, shows that the digital divide has hit some states disproportionately hard, while a few may have coped well due to adequate availability of smartphones and television sets.

THE CONTEXT: For the past 20 years, India has experienced terrestrial water storage (TWS) loss of at least 3 cm per year. In some regions, the loss has been over 4 cm per year too.

THE CONTEXT: The heaviest semi-cryogenic propellant tank (SC120- LOX) ever fabricated by Hindustan Aeronautics Limited (HAL) has been delivered to the Indian Space Research Organisation (ISRO).

THE CONTEXT:  Physicists have had a tough time making full sense of Neutron stars because of a gap in observations. Now, a new study indicates that India’s first and only space telescope, AstroSat, could bridge this gap and lend a hand in resolving a cosmic mystery.

THE CONTEXT:  The 6th Edition of India – UK Joint Company Level Military Training EXERCISE AJEYA WARRIOR has commenced at Chaubatia, Uttarakhand and will culminate on 20 Oct 2021.

THE CONTEXT: The border guarding forces of India and Nepal will conduct regular joint patrolling along the border to control trans-border crimes, smuggling of arms, human trafficking and other areas of concern, a statement by the SashastraSeema Bal (SSB)

THE CONTEXT: Tanzanian-born novelist AbdulrazakGurnah, whose work focuses on colonialism and the trauma of the refugee experience, won the Nobel Literature Prize

Q1. Which of the following pairs about armed forces exercises between India and U.K. is/are correct?