THE CONTEXT: The Ministry of Jal Shakti began ‘SUJALAM’, a ‘100 days campaign’ as part of the ‘Azadi Ka Amrit Mahotsav’ celebrations to create more and more ODF Plus villages. 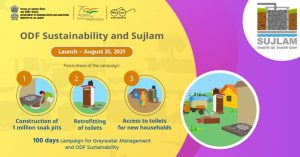 THE CONTEXT: 1,565 artisans benefitted by training in 63 Samarth Training Centres.

THE CONTEXT: India has already achieved emission reduction of 28% over 2005 levels, against the target of 35% by 2030 committed in its NDC (Nationally determined contributions). This was stated by the Union Minister of Power and New & Renewable Energy in his keynote address at the ‘INDIA-ISA Energy Transition Dialogue 2021’ organized by the International Solar Alliance (ISA) and the Union Ministry of New and Renewable Energy (MNRE).

THE CONTEXT: Union Minister of Finance and Corporate Affairs reviewed the performance of the Public Sector Banks (PSBs). The review noted that the Government’s 4R strategy of Recognition, Resolution, Recapitalization and Reform as a response to the situation prevailing in 2014 had led to dramatic improvements at PSBs in 2020-21 on various parameters of profitability, capital adequacy, NPA reduction, checks on the occurrence of fraud and mobilisation of funds from the market. 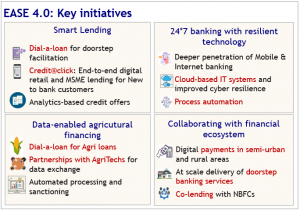 THE CONTEXT: The Cabinet Committee on Economic Affairs (CCEA) approved fair and remunerative price (FRP) of sugarcane payable by sugar mills for the 2021-22 season.

7. WILDLIFE BOARD NOD TO 10 ROADS NEAR INDO-CHINA BORDER

THE CONTEXT: The National Board of Wildlife (NWBL) has given its nod for clearances for the construction of 10 roads at the Indo-China border in Ladakh, citing their strategic importance.

THE CONTEXT: The technology which uses UV-Photocatalysis can treat municipal sewage and highly polluting industrial wastewater streams and increase its reuse as a technological option in industrial as well as municipal wastewater treatments.

THE CONTEXT: As part of military diplomacy and to strengthen the growing strategic relation with Kazakhstan, the 5th edition of Indo- Kazakhstan Joint Training Exercise, “KAZIND-21” will be conducted at Training Node, Aisha Bibi, Kazakhstan, from 30 August to 11 September 2021.

Q2. ‘Sujalam’ campaign of central government is related to which of the following?