THE CONTEXT: At least 14 States and Union Territories have reopened or plan to reopen schools partially this month.

THE CONTEXT: The Ministry of Social Justice and Empowerment has formulated a scheme “SMILE – Support for Marginalized Individuals for Livelihood and Enterprise”, which includes sub-scheme – ‘Central Sector Scheme for Comprehensive Rehabilitation of persons engaged in the act of Begging’.

5. QUALITY OF LIFE FOR ELDERLY INDEX

THE CONTEXT: Quality of Life for Elderly Index was released by Economic Advisory Council to the Prime Minister (EAC-PM). The Index has been created by the Institute for Competitiveness at the request of EAC-PM and it sheds light on an issue often not mentioned- problems faced by the elderly.

KEY HIGHLIGHTS FROM THE REPORT

THE CONTEXT: In a unique initiative Ministry of Tribal Affairs in partnership with The Art of Living Foundation, Aurangabad, Maharashtra launched Vrushka Bandhan Project where 1100 tribal women are creating Rakhis for Raksha Bandhan with seeds of indigenous trees, which is a unique contribution to increasing forest cover & combating climate change.

THE CONTEXT: Kaziranga has become the first National Park in India to have been equipped with satellite phones.

THE CONTEXT: NASA has created a visualization tool that makes data on future sea level rise from the Intergovernmental Panel on Climate Change (IPCC) accessible to the public.

10. BACKCHANNEL TALK BETWEEN INDIA, PAK WAS ON BEFORE BALAKOT AIR STRIKES

THE CONTEXT: According to a new book by the journalists, National Security Advisor (NSA) Ajit Doval and the Research and Analysis Wing (R&AW) exchanged messages with top Pakistani Inter-Services Intelligence (ISI) officials as part of a unique back channel connection between the two countries that involved two foreign journalists Adrian Levy and Cathy Scott-Clark in 2018-2019, including after the Pulwama attack. 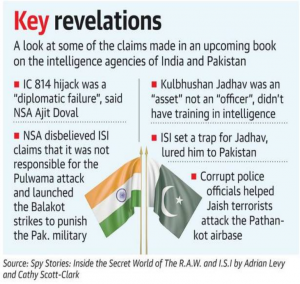 Q2. Quality of Life for Elderly Index was released by

b) Economic Advisory Council to the Prime Minister (EAC-PM)