THE CONTEXT: Uttar Pradesh government has renamed the ‘Kakori Kand’ to ‘Kakori Train action’ as the word ‘Kand’ denotes a sense of insult to this incident under India’s Independence struggle.

THE CONTEXT: Prime Minister launched the second phase of the Ujjwala gas connection scheme for the poor.

THE CONTEXT: The Supreme Court had directed political parties to publish the criminal history if any, of their election candidates on the homepage of their party websites under the caption ‘candidates with criminal antecedents’ within 48 hours of their selection. 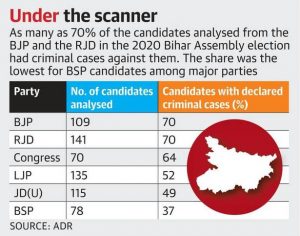 THE CONTEXT: The Lok Sabha passed the 127th Constitution Amendment Bill, 2021, with unanimous support from the House. 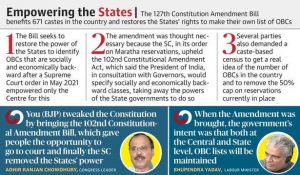 THE CONTEXT: India is ranked 122nd on a new Global Youth Development Index measuring the condition of young people across 181 countries, released by the Commonwealth Secretariat in London.

6. A THIRD OF INDIA’S COASTLINE UNDER EROSION

THE CONTEXT: As per information provided in parliament, about 32 percent of the Indian coastline is under varying degrees of erosion (low, moderate or high), 27 percent is of accreting nature and the remaining 41 percent is in a stable state.

FEW OTHER FACTS FOR PRELIMS

8. ABOUT 96,000 SALMON DIE AFTER CHLORINE LEAK IN ARCTIC NORWAY

THE CONTEXT: About 96,000 farmed salmon are believed to have died when a leak in a nearby tank sent 15,000 liters (4,000 gallons) of chlorine into a fjord in Arctic Norway.

THE CONTEXT: The Government has made a provision for the opening of Krishi Vigyan Kendra (KVK) in each of the rural districts across the country. A total of 725 KVKs have been established across the country till date.

THE CONTEXT: Since inception and till 31.03.2021, National Cooperative Development Corporation (NCDC) has disbursed Rs.1.77 lakh crore to cooperatives for their development. It includes assistance to agricultural and horticulture cooperative societies.

THE CONTEXT: Deep Ocean Mission to be implemented by Ministry of Earth Sciences at a total budget of Rs. 4077 Cr for 5 years during the period 2021-2026.

ABOUT THE DEEP OCEAN MISSION

Q 1. Consider the following statements about the Ujjwala scheme:

1. It was launched in 2015 with an aim to provide deposit-free LPG connections to BPL households.

2. The LPG connection under the scheme is given only in the name of the adult woman of the household.

3. Second phase of the scheme provides the first refill of the cylinder free of cost.

Q2. The Kakori Train Action was organized by?