THE CONTEXT: According to the government, the value of a key indicator used in the Global Hunger Index is ‘inflated’ as there are only 3.9% of Anganwadi children found to be undernourished.

THE CONTEXT:  In a couple of days or so from now, the number of Covid-19 vaccine doses administered in India will have crossed 100 crores, or 1 billion. Already, India has administered more vaccine doses than any other country in the world apart from China. 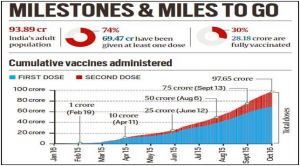 THE CONTEXT: The UK will host the COP 26 UN Climate Change Conference from October 31 to November 12. The event will see leaders from more than 190 countries, thousands of negotiators, researchers and citizens coming together to strengthen a global response to the threat of climate change. It is a pivotal movement for the world to come together and accelerate the climate action plan. This year marks the 26th Conference of Parties and will be held in the Scottish Event Campus in Glasgow.

THE CONTEXT: In view of the coronavirus disease (Covid-19) related situation and concerns surrounding the rising level of pollution due to firecrackers during the festive season, several states have imposed certain rules on fireworks this year. These vary from either a complete or a partial ban on firecracker sales in these respective states to permitting the sale of ‘green crackers’ instead.

WHAT ARE GREEN CRACKERS?

THE CONTEXT:  New Delhi is planning to engage regional powers on the future of Afghanistan. It is sending an official team to attend the Moscow process of talks on October 20 that will include the Taliban government’s, Deputy Prime Minister. New Delhi has also invited regional National Security Advisers to Delhi for a meeting in November.

Q1. Consider the following pairs of armed forces exercises between India and the U.S.

Which of the pairs given above are correctly matched?