THE CONTEXT:The first ever quantitative analysis of the attendance of Rajya Sabha (RS) MPs has revealed that, on an average, 78% of the members were always present in the House.

THE CONTEXT:The government has proposed absolving agencies involved in national security projects and border infrastructure projects from obtaining prior forest clearance from the Centre as part of amendments to the existing Forest Conservation Act (FCA). The FCA that first came in 1980 and was amended in 1988, requires such permission.

3.THE PROTOCOL ON ENVIRONMENTAL PROTECTION TO THE ANTARCTIC TREATY

THE CONTEXT: The Madrid Protocol, which confirms its commitment to preserve Antarctic environmental and dependent ecosystems, has now been signed and implemented for 30 years.

ABOUT THE ANTARCTIC TREATY

5.CASES PERTAINING TO ‘PANDORA PAPERS’ TO BE INVESTIGATED

THE CONTEXT:  The Government has directed that, investigations in cases of Pandora Papers leaks appearing in the media will be monitored through the Multi Agency Group, headed by the Chairman, CBDT, having representatives from CBDT, ED, RBI & FIU.

6. THE NOBEL PRIZE FOR PHYSIOLOGY

THE CONTEXT:  David Julius, ArdemPatapoutian share the Nobel Prize for physiology.David Julius and ArdemPatapoutian focused their work on the field of somatosensation that is the ability of specialised organs such as eyes, ears and skin to see, hear and feel. 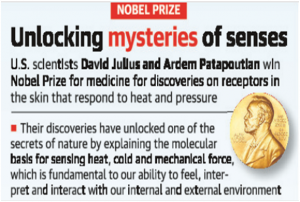 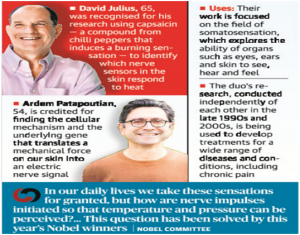 THE CONTEXT:   Health Minister launched the ICMR’s drone response and outreach in the north-east (iDrone).

THE CONTEXT:After the implementation of the scheme to purchase cow dung at Rs 2 per kg, Chhattisgarh is now moving towards generating electricity from cow dung. Chief Minister launched the power generation project on the occasion of Gandhi Jayanti.

9. JAPAN’S NEW PRIME MINISTER AND THE LONG SHADOW OF ABENOMICS

THE CONTEXT: Fumio Kishida’s task now is to prove he is the right choice to guide the Japanese economy out of the short-term Covid-19 crisis and to prepare it for the longer-term challenges ahead.

Q.1) 2021 Nobel Prize in Physiology or Medicine Awarded for?

a) Discoveries of receptors for temperature and touch

b) Discovery of cancer therapy by inhibition of negative immune regulation

d) Work on how cells sense and adapt to oxygen availability