THE CONTEXT: The newly launched Ayushman Bharat Digital Mission will involve a unique health ID for every citizen.

WHAT IS THE UNIQUE HEALTH ID?

WHAT IS A PHR ADDRESS?

WHAT DOES ONE NEED TO REGISTER FOR A HEALTH ID?

CAN I DELETE MY HEALTH ID AND EXIT THE PLATFORM?

WHAT FACILITIES ARE AVAILABLE TO BENEFICIARIES?

HOW DO PRIVATE PLAYERS GET ASSOCIATED WITH A GOVERNMENT DIGITAL ID?

WHY IS THIS INITIATIVE SIGNIFICANT?

2. CONTINUATION OF PM POSHAN IN SCHOOLS

THE CONTEXT:  The Cabinet Committee on Economic Affairs (CCEA) has approved the continuation of ‘National Scheme for PM POSHAN in Schools’ for the five-year period 2021-22 to 2025-26 with the financial outlay of 54061.73 crores rupees from the Central Government and 31,733.17 crore rupees from State Governments & UT administrations.

3. THE GOVERNMENT’S OBJECTIONS TO A CASTE CENSUS

THE CONTEXT: In an affidavit filed in the Supreme Court on September 23, the Union government has categorically ruled out conducting a Socio-Economic Caste Census (SECC), stating that a caste census (except that for the Scheduled Castes and Scheduled Tribes done traditionally) was unfeasible from an administrative point of view.

WHAT REASONS HAS THE GOVERNMENT CITED FOR NOT COUNTING CASTES ALONG WITH THE REGULAR 2021 CENSUS?

THE CONTEXT: The Supreme Court said a preliminary enquiry by the CBI into the firecracker industry, including in Tamil Nadu, revealed rampant violation of its ban on the use of toxic ingredients like Barium and its salts. The CBI was directed to examine the allegations of violation of the court ban in 2018. 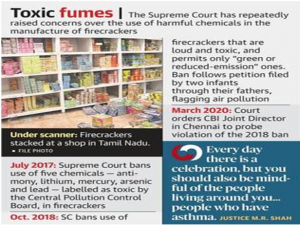 THE CONTEXT:  According to Arjan De Wagt, Head, Nutrition, UNICEF India, COVID-19 is interacting with undernutrition and exacerbating nutritional insecurities.

THE CONTEXT: Union Minister of Power and New & Renewable Energy has given his assent to amendments in the existing Renewable Energy Certificate (REC) mechanism. The intent behind this decision is to align the ‘mechanism’ with the emerging changes in the power scenario and also to promote new renewable technologies.

THE SALIENT FEATURES OF CHANGES PROPOSED IN REVAMPED REC MECHANISM

THE CONTEXT:  The Cabinet Committee on Economic Affairs approved the doubling of the Nimach-Ratlam (Madhya Pradesh) railway line as well as of the Rajkot-Kanalus (Gujarat) railway line, with an estimated project cost of over ₹1,000 crores each.

THE CONTEXT: A team of scientists have, for the first time, developed a large-scale reactor that produces a substantial amount of hydrogen using sustainable sources like sunlight and water, which is a cost-effective and sustainable process.

THE CONTEXT: The Defence Acquisition Council Wednesday approved the purchase of helicopters, surface-to-air missiles and artillery ammunition worth Rs 13,165 crore.