THE CONTEXT: Sansad TV, a news channel combining Lok Sabha TV and Rajya Sabha TV, was launched by the PM.

THE CONTEXT: NITI Aayog, with RMI and RMI India’s support, launched Shoonya—an initiative to promote zero-pollution delivery vehicles by working with consumers and industry. The campaign aims to accelerate the adoption of electric vehicles (EVs) in the urban deliveries segment and create consumer awareness about the benefits of zero-pollution delivery.

THE CONTEXT: Villagers living near Deepar Beel (Assam), a Ramsar Site wetland and Important Bird Area under stress, have opposed the proposed realignment of a railway track skirting its southern edge.

THE CONTEXT: India is expected to grow at 7.2 per cent in 2021 but economic growth could decelerate next year, according to a United Nations report which said the recovery in the country is constrained by the ongoing human and economic cost of the COVID-19 pandemic and the negative impact of food price inflation on private consumption.

THE CONTEXT: The Union Cabinet approved a number of structural and process reforms in the Telecom sector. These are expected to protect and generate employment opportunities, promote healthy competition, protect the interests of consumers, infuse liquidity, encourage investment and reduce the regulatory burden on Telecom Service Providers (TSPs). 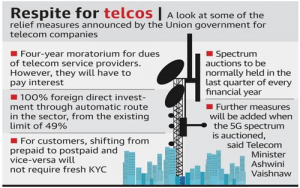 THE CONTEXT: The Central Government has approved the Production-Linked Incentive (PLI) scheme for drones and drone components.

SALIENT FEATURES OF THE PLI SCHEME FOR DRONES

THE CONTEXT: A week before a meeting of Quad leaders in Washington DC, the Biden administration, announced a new trilateral security partnership for the Indo-Pacific between Australia, the U.K. and the U.S. (AUKUS).

Q1. A new trilateral security partnership ‘AUKUS’ has been recently announced between which of the following three countries?

c) Australia, the Kingdom of Saudi Arabia and the U.S.

Q2.  “Shoonya Campaign” launched by Niti Aayog is related to: