THE CONTEXT: Two years after Uttar Pradesh Chief Minister said Raja Mahendra Pratap Singh had not received the recognition due to him for having donated land for Aligarh Muslim University (AMU) and promised to construct a university in the same city in his name, Prime Minister laid the foundation stone of the university.

THE CONTEXT:  Between 2013 and 2019, the share of agricultural households (HHs) that sold their produce in APMC mandis reduced sharply, while those that sold their produce to private traders increased significantly. Data show that a majority of the farmers were unaware of the Minimum Support Price (MSP) programme and procurement agencies. 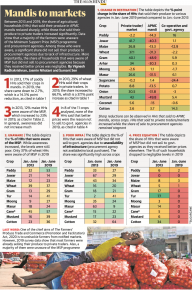 THE CONTEXT:   Inflation in wholesale prices resurged to 11.39% in August, staying in the double digits for the fifth month in a row.

THE CONTEXT: The GST Council might consider taxing petrol, diesel and other petroleum products under the single national GST regime, a move that may require huge compromises by both central and state governments on taxing these products.

GLITCHES REMAIN ON THE I-T PORTAL

THE CONTEXT: The Income Tax portal remains a festering worry for taxpayers scrambling to file their returns, ahead of the September 15 deadline set by the Union Finance Minister for the portal’s tech developer, Infosys, to resolve glitches.

THE CONTEXT: India and UK are aiming to launch the negotiations on FTA by November 2021. Two sides looking for an Interim Agreement as a priority and later a Comprehensive Agreement.