1. 1183 MOBILISATION CAMPS ORGANISED UNDER THE DDU-GKY

THE CONTEXT: As part of the Azadi Ka Amrit Mahotsav (AKAM) celebrations, around 1183 ‘mobilisation camps’ were organised across the country under the Deen Dayal Upadhyaya Grameen Kaushalya Yojana (DDU-GKY) programme between 13th and 19th August, 2021.

THE CONTEXT: The Health Ministry has decided to vaccinate returnees from Afghanistan with free polio vaccines as a preventive measure.

THE CONTEXT: India to add 35 More Earthquake Observatories by end of this year and 100 more by year 2026.

THE CONTEXT: The National Thermal Power Corporation (NTPC) Ltd has commissioned the largest floating solar PV project of 25MW on the reservoir of its Simhadri thermal station in Visakhapatnam, Andhra Pradesh.

THE CONTEXT: State-owned Oil and Natural Gas Corporation is considering inorganic investments to reach a target of 10 GW of installed renewable energy capacity by 2040. Other oil and gas PSUs are also investing in renewable energy.

6. DUST FROM THE ARABIAN DESERT IS MELTING HIMALAYAN GLACIERS AND AFFECTING THE SEAS

THE CONTEXT: Scientists say that catastrophic melting the glaciers is being exacerbated by dust blowing from West Asia. 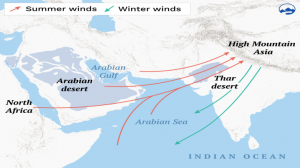 THE CONTEXT: According to a new UNICEF report, India is one of four South Asian nations where children are most vulnerable to the effects of climate change, which jeopardise their health, education, and protection.

THE CONTEXT: Data released by the Reserve Bank showed that the nation’s forex reserves decreased by $2.099 billion to stand at $619.365 billion for the week ended August 13, as a result of a decline in core currency assets as well as gold reserves. In the previous week ended August 6, the foreign exchange had seen a rise of $889 million to reach a lifetime high of $621.464 billion.

THE CONTEXT: Exercise Konkan 2021 was held between INS Tabar and HMS Westminster on 16 Aug 21 in the English Channel. .

THE CONTEXT: Indian Naval Ships Shivalik and Kadmatt arrived at Guam, an Island Territory of the USA. The two ships are scheduled to participate in the annual Exercise MALABAR-21, between navies of Australia, India, Japan and the USA.

THE CONTEXT: The Hazaras, an ethnic minority group in Afghanistan, have been subjected to repeated persecution and torture by the Taliban. According to a 2018 United Nations Assistance Mission in Afghanistan (UNAMA) report, most attacks by the Taliban on civilians in Afghanistan are directed towards the country’s minority population, most of whom are ethnic Hazaras.Just last month, the Taliban had captured and killed nine men of the Hazara community in Afghanistan.

WHO ARE THE HAZARAS?

WHY TALIBAN HATES THE HAZARAS?

1. Guam is territory of the United States.

2. It is located in the Polynesia.

Select the correct answer using code given below:
a) 1 only
b) 2 only