THE CONTEXT: Google paid a tribute to activist and author Subhadra Kumari Chauhan’s 117th birth anniversary with a creative doodle. With the doodle, the New Zealand-based guest artist, Prabha Mallya, hopes people find the courage to follow their dreams. The doodle shows Chauhan holding a pen – surrounded by several notes, the queen of Jhansi and people taking part in a protest.

2.14TH AUGUST WILL BE OBSERVED AS PARTITION HORRORS REMEMBRANCE DAY

THE CONTEXT: The Prime Minister, Shri Narendra Modi has said that in memory of the struggles and sacrifices of our people, 14th August will be observed as Partition Horrors Remembrance Day. 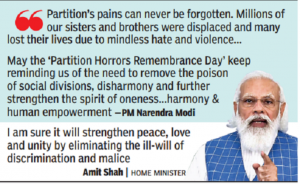 THE CONTEXT: Addressing the nation from the Red Fort in the national capital on India’s 75th Independence Day Prime Minister laid out the plan for the next 25 years before the nation.

THE CONTEXT: Four more wetlands from India get recognition from the Ramsar Secretariat as Ramsar sites. These sites are Thol and Wadhwana from Gujarat and Sultanpur and Bhindawas from Haryana.

THE CONTEXT: In TRIFED to make available eco-friendly Pankhas for eminent dignitaries and guests who will attend the Independence Day Celebrations at the Red Fort.

6. 6,808 DEATHS DUE TO HYDRO METEOROLOGICAL CALAMITIES IN 3 YEARS

THE CONTEXT: Nearly 6,800 people lost their lives in the country over the past three years due to hydro meteorological calamities such as flash floods, landslides and cyclones and West Bengal has recorded the highest deaths among all States, The details were provided by the Home Ministry.

7. THE TALIBAN’S RAPID ADVANCE ACROSS AFGHANISTAN

THE CONTEXT: Taliban insurgents now control all of Afghanistan’s major cities apart from Kabul, after making rapid advances against local forces who are largely fending for themselves as foreign troops withdraw. Talks between the Taliban and the Afghan government on a political understanding that could lead to a peace deal, backed by the United States and its allies, have failed to make significant progress.

SOME OF THE MAJOR MILESTONES IN THE ISLAMIST MILITANT MOVEMENT’S ADVANCE IN RECENT MONTHS
April 14 – President Joe Biden announces U.S. troops will withdraw from Afghanistan starting on May 1 and ending on Sept.11, bringing America’s longest war to a close. It was an extension of the previous withdrawal deadline of May 1 agreed between the United States and the Taliban.
May 4 – Taliban fighters launch a major offensive on Afghan forces in southern Helmand province. They also attack in at least six other provinces.
May 11 – The Taliban capture Nerkh district just outside the capital Kabul as violence intensifies across the country.

June 7 – Senior government officials say more than 150 Afghan soldiers are killed in 24 hours as fighting worsens. They add that fighting is raging in 26 of the country’s 34 provinces.
June 22 – Taliban fighters launch a series of attacks in the north of the country, far from their traditional strongholds in the south. The UN envoy for Afghanistan says they have taken more than 50 of 370 districts.
July 2 – American troops quietly pull out of their main military base in Afghanistan – Bagram Air Base, an hour’s drive from Kabul. It effectively ends U.S. involvement in the war.
July 5 – The Taliban say they could present a written peace proposal to the Afghan government as soon as August.
July 21 – Taliban insurgents control about a half of the country’s districts, according to the senior U.S. general, underlining the scale and speed of their advance.
July 25 – The United States vows to continue to support Afghan troops with intensified airstrikes to help them counter Taliban attacks.
July 26 – The United Nations says nearly 2,400 Afghan civilians were killed or wounded in May and June in escalating violence, the highest number for those months since records started in 2009.
Aug. 6 – Zaranj in the south of the country becomes the first provincial capital to fall to the Taliban in years. Many more are to follow in the ensuing days, including the prized city of Kunduz in the north.
Aug. 13 – Four more provincial capitals fall in a day,including Kandahar, the country’s second city and spiritual home of the Taliban. In the west, another key city, Herat, is overrun and veteran commander Mohammad Ismail Khan, one of the leading fighters against the Taliban, is captured.
Aug. 14 – The Taliban take the major northern city of Mazar-i-Sharif and, with little resistance, Pul-e-Alam, capital of Logar province just 70 km (40 miles) south of Kabul. The United States sends more troops to help evacuate its civilians from Kabul as Afghan President Ashraf Ghani says he is consulting with local and international partners on next steps.
Aug. 15 – The Taliban take the key eastern city of Jalalabad without a fight, effectively surrounding Kabul.

Q 1. Which of the following pairs are correctly matched?