THE CONTEXT: When the Ever Given, one of the world’s largest container ships, lost control in the midst of a dust storm and high winds on March 23, and became wedged across the Suez Canal, it was an event of international significance that also rekindled Japanese interest in finding alternative routes to Europe 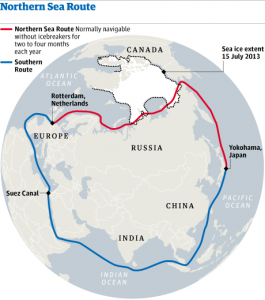 CONCLUSION:  The opening of the sea routes and the exploration of hydrocarbons present economic opportunities which Indian companies can also exploit. On the negative side, the enhancement of economic activity in the Arctic Region will accelerate global warming and lead to large sea level rise impacting the global climate.