1. EXPLAINED: WHAT ARE NAIROBI FLIES, WHICH ARE CAUSING DISEASE IN SIKKIM?

THE CONTEXT: According to the state health officials, around 100 students of an engineering college in East Sikkim have reported skin infections after coming in contact with Nairobi flies.

What are Nairobi flies?

How are humans affected by them?

Have there been outbreaks of the disease?

What is the way to protect oneself against Nairobi flies?

2. EXPLAINED: WHAT ARE CRITICAL MINERALS, THE CENTERPIECE OF A NEW INDIA-AUSTRALIA COLLABORATION?

THE CONTEXT: Recently, India and Australia decided to strengthen their partnership in the field of projects and supply chains for critical minerals.

As part of his six-day tour of Australia, Union Coal and Mines Minister met his counterpart, Resources and Northern Australia Minister Madeleine King, after which Australia confirmed that it would “commit A$5.8 million to the three-year India-Australia Critical Minerals Investment Partnership”.

“Australia has the resources to help India fulfil its ambitions to lower emissions and meet growing demand for critical minerals to help India’s space and defence industries, and the manufacture of solar panels, batteries and electric vehicles.

What are critical minerals?

Why is this resource critical?

What is the China ‘threat’?

3. THE STATUS OF CHINA’S BELT AND ROAD INITIATIVE IN SOUTH ASIA

THE CONTEXT:Recently concluded summit of G-7 leaders in Germany, U.S. President and his allies unveiled their $600 billion plan called the Partnership for Global Infrastructure and Intelligence which is being seen as a counter to China’s Belt and Road Initiative (BRI).

What is China’s Belt and Road Initiative?

In 2013, Chinese President Xi Jinping, during his visits to Kazakhstan and Indonesia, expressed his vision to build a Silk Road Economic Belt and a 21st Century Maritime Silk Road, to break the “bottleneck” in Asian connectivity. This vision led to the birth of the BRI.

The initiative envisioned a Chinese-led investment of over $1 trillion in partner countries by 2025. More than 60 countries have now joined BRI agreements with China, with infrastructure projects under the initiative being planned or under construction in Asia, Africa, Europe, and Latin America.

To finance BRI projects, China offers huge loans at commercial interest rates that countries have to pay within a fixed number of years. The west has accused China of debt-trapping by extending “predatory loans” that force countries to cede key assets to China.

However, research indicates that low and middle-income countries are often the ones to approach China after not being able to secure loans from elsewhere.

In recent years, the BRI seems to have experienced a slowing down as annual Chinese lending to countries under the initiative slimmed from its peak of $125 billion in 2015 to around $50 to 55 billion in 2021. 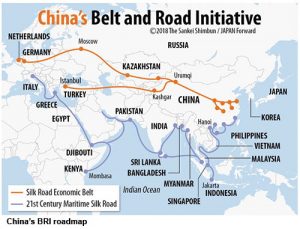 What have been the BRI’s investments in Pakistan? 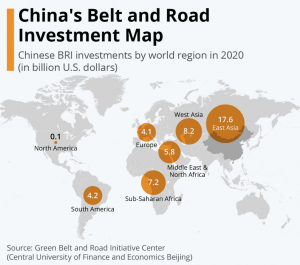 What about Sri Lanka?

Are there projects in Afghanistan?

How have projects from India and China progressed in Maldives?

THE CONTEXT:The Large Hadron Collider beauty (LHCb) experiment — which is investigating the slight differences between matter and antimatter by studying a type of particle called the “beauty quark”, or “b quark” has observed three never-before-seen particles.

How does it work?

5. WHAT IS THE FIELDS MEDAL, SO-CALLED ‘MATHEMATICS NOBEL’ AWARDED TO UKRAINIAN PROFESSOR AND THREE OTHERS?

THE CONTEXT:Ukrainian mathematician Maryna Viazovska, chair of Number Theory at École polytechnique fédérale de Lausanne (EPFL) in Switzerland, was named as one of four recipients of the 2022 Fields Medal, an honour that is often described the Nobel Prize in mathematics.

Q.The term “Pederin” recently seen in the news, related to

a) A substance released by insects which cause irritation.

b) A Critical mineral recently found in Australia, which helps in the production of Lithium.

d) A chemical substance found in toiletries which causes cancer.