THE ART AND CULTURE

THE CONTEXT: DNA samples collected from two human skeletons unearthed at a necropolis of a Harappan-era city site in Haryana have been sent for scientific examination, the outcome of which might tell about the ancestry and food habits of people who lived in the Rakhigarhi region thousands of years ago.

THE CONTEXT: Justices Sudhanshu Dhulia and Jamshed Burjor Pardiwala took oath as Supreme Court judges on 09th May.They would be judges 33 and 34, completing the sanctioned judicial strength of the court.

THE CONTEXT: According to The State of the World’s Birds  13.5% of 10,994 recognised extant species are currently threatened with extinction.

5. IS LA NINA A FAIR-WEATHER FRIEND OF OUR COUNTRY?

THE CONTEXT: In most years, meteorologists consider the La Nina to be a friend of India. The phenomenon associated with below normal sea surface temperatures in the eastern and central Pacific Ocean, makes the summer monsoon wetter and the winter colder unlike its evil twin, the El Nino, or a warming phenomenon that frequently dries up monsoon rains over India.

6. WHAT IS THE DEBATE AROUND STAR RATINGS FOR FOOD PACKETS MOOTED BY FSSAI?

THE CONTEXT: The Food Safety and Standards Authority of India (FSSAI) is expected to issue a draft regulation for labels on front of food packets that will inform consumers if a product is high in salt, sugar and fat. It is expected to propose a system under which stars will be assigned to a product, which has earned the ire of public health experts and consumer organisations who say it will be misleading and ineffective. Health experts are demanding that the FSSAI instead recommend the “warning label” system which has proven to have altered consumer behaviour.

Q. Which of the following pairs is/are correctly matched?

ANSWER FOR THE 7TH OF MAY

(Newspapers, PIB and other important sources)

Questions for the MAIN exam

To attempt the Quiz, simply click on START Button.

You have already completed the quiz before. Hence you can not start it again.

You have to finish following quiz, to start this quiz:


THE CRIMINAL PROCEDURE (IDENTIFICATION) BILL, 2022- THE OBJECTIVES AND CONCERNS

THE CONTEXT: The Criminal Procedure (Identification) Bill, 2022, was enacted by Parliament on April 6 to replace the Identification of Prisoners Act of 1920. The new law empowers police and investigating agencies to acquire and keep personally-identifying information on individuals, such as bio-metrics and biological samples. The Bill, which was introduced on March 28, was quickly passed by both houses. However, various segments of society have expressed worry about the implications for privacy rights. This article examines the issue in detail.

Note: on 18th April 2022 the President has given assent to the Bill.

KEY FEATURES OF THE BILL 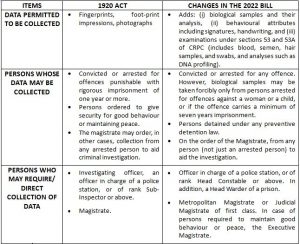 WHAT IS THE NEED FOR THE BILL? 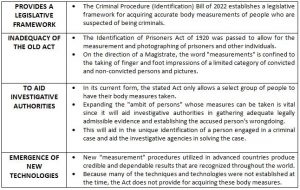 CAN YOU BE COMPELLED TO GIVE YOUR MEASUREMENTS?

WHAT ARE THE ISSUES INVOLVED IN THE BILL?

FAILS THE TEST OF ARTICLE 14:

TIME PERIOD FOR WHICH THE DATA IS COLLECTED:

CREATION OF A POLICE STATE:

CONSTITUTIONALITY OF COLLECTING BIOLOGICAL SAMPLES OR OTHER MEASUREMENTS FOR FACILITATING INVESTIGATION

The Supreme Court of India held in State of Bombay vs Kathi Kalu in 1961 that the expression “to be a witness” under Articles 20(3) of the Constitution does not include a person in custody giving his specimen handwriting or signature or impression of his thumb, finger, palm, or foot to the investigating officer. Similarly, it has been held in a slew of cases that taking a blood sample for a DNA test, a hair sample, or a voice sample will not amount to compelling an accused to become a witness against himself. This is because such samples are harmless and do not convey information within the accused’s personal knowledge. As a result, the legality of taking biological samples or other measurements to aid investigation has long been established. The only exceptions are scientific techniques, namely narcoanalysis, polygraphy and brain fingerprinting which the Supreme Court in Selvi vs State of Karnataka (2010) held to be testimonial compulsions (if conducted without consent), and thus prohibited under Article 20(3) of the Constitution.

WHAT IS THE WAY FORWARD?

THE CONCLUSION: No society, including ours, is flawless. Our social consciousness is riddled with deeply entrenched biases and preconceptions. Our police force is a product of its social environment, and as a result, it is far from ideal. That does not preclude us from providing it with the necessary powers and instruments. There is an undeniable necessity to strike a balance between respecting an individual’s privacy while also providing law enforcement with the tools they require to keep us safe.