THE CONTEXT: TRIFED, FITT and Rusicaa Beverages have entered into a Memorandum of Understanding (MoU) to work together to enhance the income of tribals of Jharkhand through the commercial production and sale of Mahua Nutra beverage, a value-added product made out of Mahua flowers in the state.

THE CONTEXT: The Indian Railways is heading for a major restructuring plan that could lead to the closure of major establishments, the merger of decades-old organisations and private participation in the running of its schools and hospitals.

THE CONTEXT: The Supreme Court Collegium, led by Chief Justice of India (CJI) N.V. Ramana, is proceeding with staggering speed to fill the vacancies and strengthen the judiciary as seen in the latest slew of recommendations, which include eight new Chief Justices to High Courts, the transfer of five High Court Chief Justices and the shuffling of 28 High Court judges across the country. 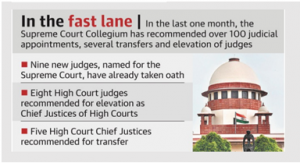 THE CONTEXT: U.S. President Joe Biden announced the Global Methane Pledge, a U.S. – EU led effort to cut methane emissions by a third by the end of this decade.

THE CONTEXT: The GST Council’s 45th meeting was held in Lucknow under the chairmanship of the Union Finance & Corporate Affairs Minister Smt. Nirmala Sitharaman.

THE CONTEXT: MyGov India, under the Ministry of Electronics and Information Technology (MeitY), has launched the Planetarium Innovation Challenge for Indian start-ups and tech entrepreneurs.

THE CONTEXT: According to the MEA, Mr Jaishankar once again stressed that peace and tranquillity along the LAC, which depended on resolving all the remaining issues of the 17-month-long stand-off.

THE CONTEXT: “The first issue is that the change of authority in Afghanistan was not inclusive and this happened without negotiation. This raises questions on the prospects of recognition of the new system. Representation of all sections of Afghans, including women and the minorities, is important,” Mr Modi said in a speech at the Afghanistan-themed outreach summit between the Shanghai Cooperation Organisation (SCO) and the Collective Security Treaty Organisation (CSTO).

Which of the given statements are correct?

Who can register in the e-Shram (NDUW) Portal?

Any individual satisfying the following conditions can register on the portal:

Not a member of EPFO/ESIC or NPS (Govt. funded)