THE CONTEXT: The Ministry of Women and Child Development has planned a series of activities throughout the POSHAN Maah-2021 in tandem with the States/UTs. 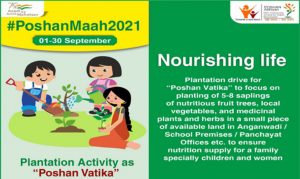 3. AUTOMATIC MACHINE FOR THE PRODUCTION OF CONICAL SHAPED FIREWORKS

THE CONTEXT:  The MSME Tool Room, Hyderabad, Central Institute of Tool Design (CITD) has obtained a patent for the invention entitled “AUTOMATIC MACHINE FOR THE PRODUCTION OF CONICAL SHAPED FIREWORKS” for 20 years from the 10th November,2015.

THE CONTEXT: An Indian researcher has fabricated paper honeycomb and stronger polymer honeycomb structure as sound-absorbing panels that dissipate acoustic energy to low-frequency ranges. The technology can be used in building acoustics and also as environmental noise control solution.

THE CONTEXT: Atal Innovation Mission (AIM), NITI Aayog in collaboration with the Indian Space Research Organisation (ISRO) and Central Board of Secondary Education (CBSE) successfully launched the ATL Space Challenge 2021 for all school students across the country.

THE CONTEXT: India and the U.S. have agreed to expand their energy partnership by adding emerging fuels to the list of areas of cooperation that previously included power and energy efficiency, oil and gas, renewable energy and sustainable growth.

THE CONTEXT: The 13th BRICS summit held virtually called for an “inclusive intra-Afghan dialogue” for stability in Afghanistan.

Q1. In order to ensure community mobilization and bolster people’s participation, every year, which month of year is celebrated as ‘POSHAN Maah’ across the country?