THE CONTEXT: The Supreme Court has held that the Railways will have to pay passengers compensation for the late running of trains if unable to establish or prove that the delay was due to reasons beyond its control.

THE CONTEXT: Activists highlighted the plight of rivers as well as the support building up for according rights to them at the ongoing International Union for the Conservation of Nature (IUCN) World Conservation Congress September 8, 2021 in Marseille, France.

SOURCE : Down to Earth

THE CONTEXT:  According to data from the India Meteorological Department (IMD), as many as 673 out of India’s 733 districts face arid conditions now. 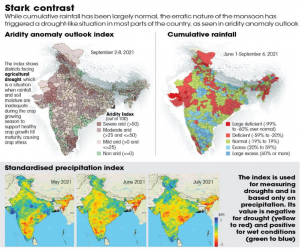 SOURCE : Down to Earth

THE CONTEXT: Government has approved the PLI Scheme for Textiles for MMF Apparel, MMF Fabrics and 10 segments/ products of Technical Textiles with a budgetary outlay of Rs. 10,683 crores.

THE CONTEXT: The government increased the minimum support price (MSP) for wheat for the upcoming rabi season to ₹2,015 per quintal, a 2% hike from the ₹1,975 per quintal rate of last year.

THE CONTEXT:  India and Russia conducted their first “detailed and extensive review” of the situation in Afghanistan, agreeing to coordinate their positions at the United Nations, as a delegation led by Russia’s Security Council Secretary General Nikolai Patrushev met National Security Adviser Ajit Doval in Delhi.

THE CONTEXT:  India and Australia will hold the inaugural 2+2 Ministerial meeting in New delhi during the upcoming visit of Foreign Minister Marise Payne and Minister of Defence Peter Dutton.