THE CONTEXT: Chief Justice of India N V Ramana administered the oath of office to the new judges in a swearing-in ceremony held in the auditorium of the Supreme Court’s additional building complex. 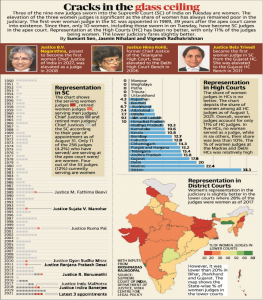 2. NATIONAL PARTIES COLLECTED OVER ₹3,370 CRORE FROM FROM UNKNOWN SOURCES

THE CONTEXT: According to poll rights group Association for Democratic Reforms (ADR), National parties collected 3,377.41 crore rupees from unknown sources in the 2019-20 financial year, which was 70.98% of the total income of these parties.

THE CONTEXT: Top Army and police officers held a conversation-cum-counselling session with around 80 families of militant recruits in south Kashmir in a bid to initiate their safe return to the mainstream.

THE CONTEXT: CSIR-CMERI is developing a Mechanized Scavenging System, which was initiated after intensive studies of the diverse nature of Indian Sewerage Systems and the manner of its chokages.

THE CONTEXT: As per the provisional estimates of GDP released by the MoSPI, India GDP Q1 Data: India’s Gross Domestic Product (GDP) for the April-June quarter (Q1) of the ongoing financial year 2021-22 (FY22) grew by 20.1 per cent.

THE CONTEXT:  The Office of Economic Adviser, Department for Promotion of Industry and Internal Trade (DPIIT) is released Index of Eight Core Industries (ICI) for the Month of July, 2021.

THE CONTEXT: The United Nations Security Council under India’s presidency passed the Resolution that reminded Taliban to stand by its commitment to prevent international terrorism.

THE CONTEXT: Indian Navy’s Offshore Patrol Vessel INS Savitri departed Visakhapatnam and is enroute to Chittagong, Bangladesh to support the ongoing efforts of the Bangladesh military and government agencies in combating the ongoing wave of the Covid pandemic in their country.

THE CONTEXT: With uncertainty hanging over the international representation of Afghanistan under the Taliban, a question has risen over its membership in the South Asian Association for Regional Cooperation (SAARC), which is scheduled to meet next in Islamabad.